Syndicated columnist Mark Shields and New York Times columnist David Brooks join Judy Woodruff to discuss the latest political news, including a surreal week in which much of American daily life shut down, bright spots of people helping each other in a time of need, President Trump’s handling of the crisis, the ongoing issue of political polarization and how government should respond.

From a physician in Orange County, CA:

“I personally have been microwaving my N95 mask at home everyday so I can reuse it since I travel to several clinics per day and see some high risk patients. The microwave denatures the proteins (and by extrapolation, the virus) and makes it safe to reuse! (the same procedure is used to clean our kitchen sponges)..”

Microwaves are used in medicine for disinfection of soft contact lenses, dental instruments, dentures, milk, and urinary catheters for intermittent self-catheterization925-931. However, microwaves must only be used with products that are compatible (e.g., do not melt) 931. Microwaves are radio-frequency waves, which are usually used at a frequency of 2450 MHz. The microwaves produce friction of water molecules in an alternating electrical field. The intermolecular friction derived from the vibrations generates heat and some authors believe that the effect of microwaves depends on the heat produced while others postulate a nonthermal lethal effect932-934. The initial reports showed microwaves to be an effective microbicide. The microwaves produced by a “home-type” microwave oven (2.45 GHz) completely inactivate bacterial cultures, mycobacteria, viruses, and G. stearothermophilus spores within 60 seconds to 5 minutes depending on the challenge organism933, 935-937. Another study confirmed these resuIts but also found that higher power microwaves in the presence of water may be needed for sterilization932. Complete destruction of Mycobacterium bovis was obtained with 4 minutes of microwave exposure (600W, 2450 MHz)937. The effectiveness of microwave ovens for different sterilization and disinfection purposes should be tested and demonstrated as test conditions affect the results (e.g., presence of water, microwave power). Sterilization of metal instruments can be accomplished but requires certain precautions.926. Of concern is that home-type microwave ovens may not have even distribution of microwave energy over the entire dry device (there may be hot and cold spots on solid medical devices); hence there may be areas that are not sterilized or disinfected. The use of microwave ovens to disinfect intermittent-use catheters also has been suggested. Researchers found that test bacteria (e.g., E. coli, Klebsiella pneumoniae, Candida albicans) were eliminated from red rubber catheters within 5 minutes 931. Microwaves used for sterilization of medical devices have not been FDA cleared.

To celebrate the launch of “The Woods”, the third album from acclaimed musician Hamish Napier Music, we’ve teamed up to bring you an audio-visual treat.

The Woods was commissioned by #CairngormsConnect to celebrate the ancient forests that make the project area so special.

Hamish has used the Scottish Gaelic alphabet, which is centred around Scotland’s native trees, to explore the folklore, natural and social heritage of Strathspey.

These covers are closer to still life studies, rather than two-dimensional posters. Experimenting with different paper sizes and angles, he occasionally shows their spines, and the shadows they cast. It is a celebration of books as treasured objects. His drawings – in particular his studies for his large-scale oil paintings with their notes scribbled down the margins – are some of his most intimate works to date.

The ensuing images are humorous, sardonic and nostalgic at the same time, while the painting style hints at the dog-eared, scuffed covers of the Penguin classics themselves.

Starting with Jay Jopling in 1996, when Miller exhibited in a group show at London’s Institute of Contemporary Art, his works have garnered many a famous fan. Amongst which are AC/DC’s guitarist Angus Young, David Bailey, and Elton John – whose work amusingly, if a little painfully, bears the title ‘International Lonely Guy.’

Underappreciated in her lifetime, the career of late Irish architect and designer Eileen Gray is the subject of a timely new exhibition at The Bard Graduate Center Gallery in New York. Jennifer Goff, curator of the Eileen Gray collection at the National Museum of Ireland, tells us more.

Eileen Gray (born Kathleen Eileen Moray Smith; 9 August 1878 – 31 October 1976) was an Irish architect and furniture designer and a pioneer of the Modern Movement in architecture. Over her career, she was associated with many notable European artists of her era, including Kathleen Scott, Adrienne Gorska, Le Corbusier, and Jean Badovici, with whom she was romantically involved. Her most famous work is the house known as E-1027 in Roquebrune-Cap-Martin, France.

From 1922/1923 to 1926 Gray created an informal architectural apprenticeship for herself as she never received any formal training as an architect. She studied theoretical and technical books, took drafting lessons, and arranged to have Adrienne Gorska take her along to building sites. She also traveled with Badovici to study key buildings and learned by reworking architectural designs. 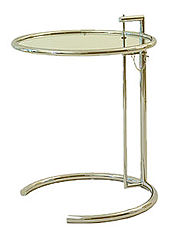 In 1926, she started work on a new holiday home near Monaco to share with Badovici. Because a foreigner in France couldn’t wholly own property, Gray bought the land and put it in Badovici’s name, making him her client on paper. Construction of the house took three years and Gray remained on site while Badovici visited occasionally.

Renewed interest in Gray’s work began in 1967 when historian Joseph Rykwert published an essay about her in the Italian design magazine Domus. After the publishing of the article many “students began to ring at her door” as eager to learn from the now famous designer.

The first retrospective exhibition of her work, titled ‘Eileen Gray: Pioneer of Design’, was held in London in 1972. A Dublin exhibition followed the next year. At the Dublin exhibit, the 95 year old Gray was given an honorary fellowship by the Royal Institute of the Architects of Ireland.

In 1973 Gray signed a contract to reproduce the Bibendum chair and many of her pieces for the first time. They remain in production.

Eileen Gray died on Halloween 1976. She is buried in the Père Lachaise cemetery in Paris, but because her family omitted to pay the licence fee her grave is not identifiable.

Soar high above the hills of the Scottish Highlands with Tilly the golden Eagle.

Gion Mikaku, founded 1929: – 2 different cuts of beef: Tajima beef filet mignon and Kobe beef rump steak with just the right amount of marbling (intra-muscular fat) and no extra-muscular fat – 400g in total. Steak cutting behind a window in their kitchen, friendly, dedicated service, pleasant view, extra hot griddle for proper searing, right timing and handling of the steaks: they certainly know what they are doing – This restaurant meal included garlic rice (between steak and dessert).

Scientists lead the way in repairing the cathedral, while discovering historical insights along the way.

Filmed and Edited by: Janne Tanskanen

Flung out into the Atlantic and shaped by the sheer force of the sea, Connemara’s islands are spectacular remnants of life long lost in other parts of Ireland. Staunchly proud of their traditions and as famous for their culture as their dramatic landscapes, Inishbofin and the Aran Islands are a patchwork of tiny, tightly packed fields, rambling stone walls, pristine beaches and craggy shores.

The islands’ relative isolation has fostered a profound sense of peace and protected a rich traditional heritage. They’re wonderful places to walk or cycle, and famous for their live music and traditional dances.

Situated in the choppy waters of Galway Bay, the three Aran Islands in the Gaeltacht region. The largest and most developed island is Inis Mór, a place blanketed in fissured limestone and snaking stone walls. The island’s most famous sight is Dún Aonghasa, a breathtaking semi-circular stone fort perched dramatically on top of a 100m cliff. Other prehistoric forts dot the island, as well as numerous early Christian remains. The heritage centre, Ionad Árann, gives a great insight into the island’s history and traditions but you’ll also see them first hand in the nightly music sessions, regular dances and impromptu storytelling.