“This solution takes housing into a new digital age of rich information about the home buyer. After Module Housing has the buyer complete a profile, the builder then has access to their current needs and future plans. And, instead of all their future plans going to big box merchants or online vendors, the sales go back to the builder, creating a new more sophisticated brand experience for the builder, not to mention elongating the revenue stream.”

“A short film of 18 days across the most unique country of Africa.
A lifetime experience with a road trip of 8.000km from north to south Namibia.”

Music by: Cee-Roo – “Feel The Sounds of Kenya” 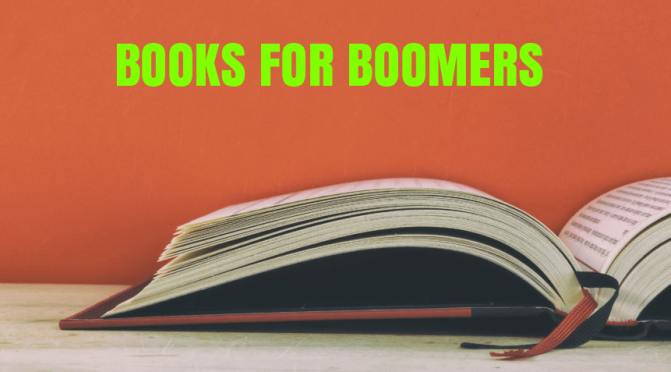 Talking to Strangers is a classically Gladwellian intellectual adventure, a challenging and controversial excursion through history, psychology, and scandals taken straight from the news. He revisits the deceptions of Bernie Madoff, the trial of Amanda Knox, the suicide of Sylvia Plath, the Jerry Sandusky pedophilia scandal at Penn State University, and the death of Sandra Bland—throwing our understanding of these and other stories into doubt. Something is very wrong, Gladwell argues, with the tools and strategies we use to make sense of people we don’t know. And because we don’t know how to talk to strangers, we are inviting conflict and misunderstanding in ways that have a profound effect on our lives and our world. In his first book since his #1 bestseller, David and Goliath, Malcolm Gladwell has written a gripping guidebook for troubled times.

Nick Howe catches up with planetary science reporter, Alex Witze. They discuss the latest US plans to land people on the moon by 2024, the history of the Apollo missions, and what’s next for the lunar exploration.

From Forbes.com article by Biz Carson:

Davidson’s (Sonder’s) vision starts with offering apartment-style units that provide the consistent service of a hotel—with tweaks such as smartphone-only check-in. Its properties are listed on Airbnb (as well as Booking and Expedia), so families, friends or business travelers can book. Only one third of guests are business travelers, Davidson says.The extra cash will help him achieve this vision of becoming the dominant brand and also keep it the largest in the space, where it competes with Airbnb-backed Lyric, plus Domio and StayAlfred, among others. 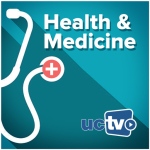 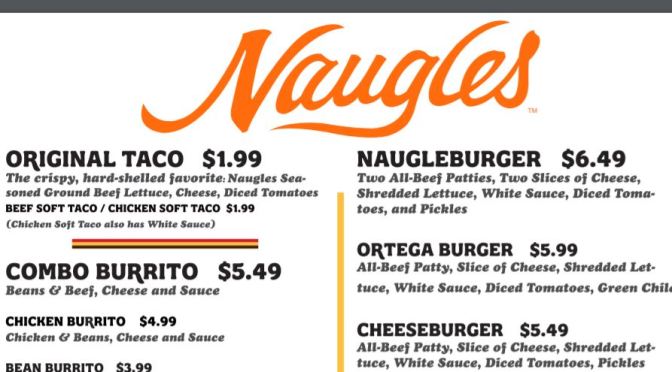 It was a rival to Taco Bell and Del Taco in the fast-food Cal-Mex wars of the 1970s, until Del Taco acquired the company in 1995 and unceremoniously shut it down. The erasure was so complete that when food writer Christian Ziebarth petitioned the United States Patent and Trademark Office in 2012 to take control of Naugles’ trademark, arguing that Del Taco had done nothing with it for decades and he was therefore legally allowed to revive the chain, the feds sided with him (Del Taco is still fighting the ruling).

The opening weeks of Naugles’ Fountain Valley location in 2015 were so hectic that fans fainted in line because of the hours-long wait and excitement. As recently as May, a pop-up at Euryale Brewing Company in Riverside drew more than 700 people — far more than the 200 who reserved online.

From NPR.org article by Laurel Wamsley

An emblem of the hippie era in America, the car was marketed in the U.S. as adorably uncool. Volkswagen promoted the Beetle with cheeky advertising campaigns using slogans like “Live below your means” and “It’s ugly, but it gets you there.” In 1969, one of the vehicles cost $1,799.

It’s the end of an era — an era that has stretched on for a very long time, albeit with slightly different silhouettes.

The last Volkswagen Beetle, a third-generation Denim Blue coupe, will be produced in Puebla, Mexico, on Wednesday.

“It’s impossible to imagine where Volkswagen would be without the Beetle,” said Scott Keogh, president and CEO of Volkswagen Group of America. “While its time has come, the role it has played in the evolution of our brand will be forever cherished.”

As part of its ongoing 50th anniversary celebration, Led Zeppelin has launched a new video series on its official YouTube channel looking at key highlights of the legendary band’s history.

The first episode of the Led Zeppelin History series begins in September 1968, when the band began recording its self-titled debut album at London’s Olympic Studios, starting with “Babe, I’m Gonna Leave You” and “You Shook Me.”

Using archival footage of the group in concert as a backdrop, and soundtracked by “Babe, I’m Gonna Leave You,” the video goes on to note that the album was self-financed, was recorded in just 30 hours, and cost 1,782 pounds — equivalent of around $2,300 in today’s money.

The clip also offers the following quotes from the band members about the making of Led Zeppelin I:

Jimmy Page: “The group had only been together for two-and-a-half weeks when we recorded it.”

Robert Plant: “We weren’t in a position at that time to be able to block whole studio time.”

Page: “We deliberately aimed at putting down what we could reproduce live on stage.”

Check the Led Zeppelin YouTube channel soon for the second episode of the series.

From Insider.com (via Business Insider): 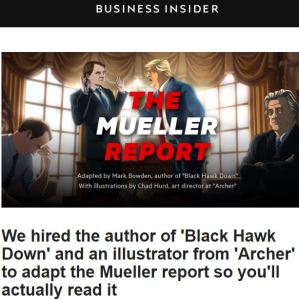 It feels as if nobody read the Mueller report. That’s a shame, because it’s an important document, depicting possible crimes by a sitting US president.

But not reading it makes sense. As a narrative, the document is a disaster. And at 448 pages, it’s too long to grind through. For long stretches, it reads less like a story and more like a terms-of-service agreement. The instinct to click “next” is strong.

And yet, buried within the Mueller report, there is a narrative that reads in parts like a thriller, like a comedy, like a tragedy — and, most important — like an indictment. The facts are compelling, all the more so because they come not from President Donald Trump’s critics or “fake news” reports, but from Trump’s own handpicked colleagues and associates. The story just needed to be rearranged in a better form.

So we hired Mark Bowden, a journalist and author known for his brilliant works of narrative nonfiction like “Black Hawk Down,” “Killing Pablo,” and “Hue 1968.”

Read the full adaptation by clicking link below: