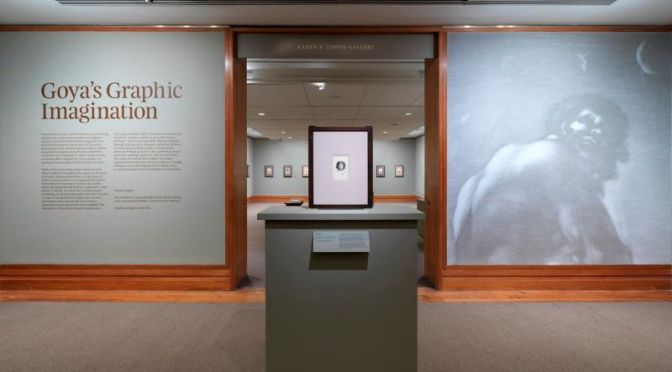 Mark McDonald, Curator in the Department of Drawings and Prints, takes us on a virtual tour of Goya’s Graphic Imagination to explore how Goya’s drawings and prints allowed him to share his complex ideas and respond to the turbulent social and political changes occurring in the world around him.

In this two-part series, six US museum directors discuss the pandemic and its repercussions for their institutions. These candid, insightful conversations address wide-ranging topics, from the logistical challenges of when to close and how to reopen to philosophical exchanges about the role of museums in society.

This first episode features Max Hollein of The Metropolitan Museum of Art in New York, Kaywin Feldman of the National Gallery of Art in Washington, DC, and James Rondeau of the Art Institute of Chicago.

This second episode features Matthew Teitelbaum of the Museum of Fine Arts, Boston, Ann Philbin of the Hammer Museum in Los Angeles, and Timothy Potts of the J. Paul Getty Museum.

The British Galleries are reopening with almost 700 works of art on view, including a large number of new acquisitions, particularly works from the 19th century that were purchased with this project in mind. This is the first complete renovation of the galleries since they were established (Josephine Mercy Heathcote Gallery in 1986, Annie Laurie Aitken Galleries in 1989). A prominent new entrance provides direct access from the galleries for medieval European art, creating a seamless transition from the Middle Ages to the Renaissance. 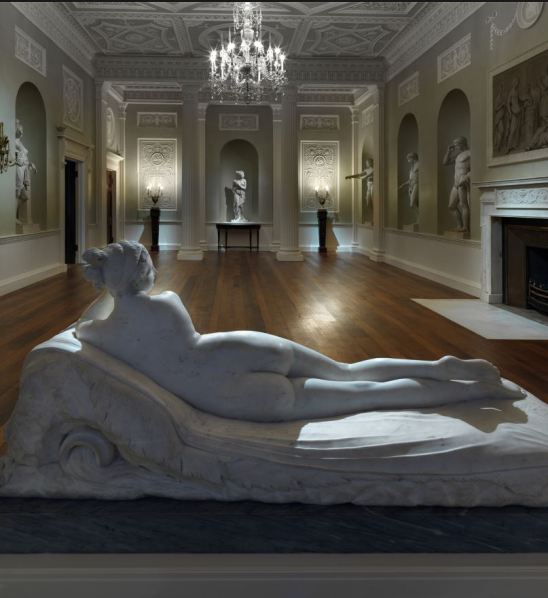 A highlight of The Metropolitan Museum of Art’s 150th anniversary in 2020 is the opening, on March 2, of the Museum’s newly installed Annie Laurie Aitken Galleries and Josephine Mercy Heathcote Gallery—11,000 square feet devoted to British decorative arts, design, and sculpture created between 1500 and 1900. The reimagined suite of 10 galleries (including three superb 18th-century interiors) provides a fresh perspective on the period, focusing on its bold, entrepreneurial spirit and complex history. The new narrative offers a chronological exploration of the intense commercial drive among artists, manufacturers, and retailers that shaped British design over the course of 400 years. During this period, global trade and the growth of the British Empire fueled innovation, industry, and exploitation. Works on view illuminate the emergence of a new middle class—ready consumers for luxury goods—which inspired an age of exceptional creativity and invention during a time of harsh colonialism.

Watch a video preview of Gerhard Richter: Painting After All, on view at The Met Breuer from March 4 through July 5, 2020. The exhibition, which considers Richter’s six-decade-long preoccupation with the dual means of representation and abstraction to explore the material, conceptual and historical implications of painting, spans the entirety of Richter’s prolific and innovative career, and presents over one hundred works that focus on his specific commitment to the medium, as well as his related interests in photography, digital reproduction, and sculpture.

Over the course of his acclaimed 60-year career, Gerhard Richter (b. 1932) has employed both representation and abstraction as a means of reckoning with the legacy, collective memory, and national sensibility of post–Second World War Germany, in both broad and very personal terms.

This handsomely designed book features approximately 100 of his key canvases, from photo paintings created in the early 1960s to portraits and later large-scale abstract series, as well as select works in glass.

New essays by eminent scholars address a variety of themes: Sheena Wagstaff evaluates the conceptual import of the artist’s technique; Benjamin H. D. Buchloh discusses the poignant Birkenau paintings (2014); Peter Geimer explores the artist’s enduring interest in photographic imagery; Briony Fer looks at Richter’s family pictures against traditional painting genres and conventions; Brinda Kumar investigates the artist’s engagement with landscape as a site of memory; André Rottmann considers the impact of randomization and chance on Richter’s abstract works; and Hal Foster examines the glass and mirror works. As this book demonstrates, Richter’s rich and varied oeuvre is a testament to the continued relevance of painting in contemporary art.

Gerhard Richter was born in Dresden on 9th February 1932, the first child of Horst and Hildegard Richter. A daughter, Gisela, followed four years later. They were in many respects an average middle-class family: Horst worked as a teacher at a secondary school in Dresden and Hildegard was a bookseller who liked to play the piano.1 In an interview with Robert Storr, Richter described his early family life as “simple, orderly, structured – mother playing the piano and father earning money.”2

In 1935, Horst accepted a teaching position at a school in Reichenau, a town which today is known as Bogatynia in Poland, at the time located in the German province Saxony. Settling in Reichenau was a drastic change for the family, which was accustomed to the vivid cultural life of the larger Dresden.3 Yet, it was also a move which would keep the family largely safe from the coming war. In the late 1930s Horst was conscripted into the German army, captured by Allied forces and detained as a prisoner of war until Germany’s defeat. In 1946, he was released and returned to his family, who had again relocated, this time to Waltersdorf, a village on the Czech border.
Website

Watch Episode 1, “Looking back to look forward,” in which Met image archivist Stephanie Post, educator and former-Project Runway host Tim Gunn, and New York City Ballet dancer Silas Farley share how their encounters with history and the Museum inform their sense of self and their creative practices.

As part of The Met’s 150th anniversary, Met Stories is a new video series and year-long social media initiative that shares unexpected and compelling stories gathered from the many people who visit The Met, whether artists, teachers, curators, actors, museum staff, designers, thought-leaders, or public figures. 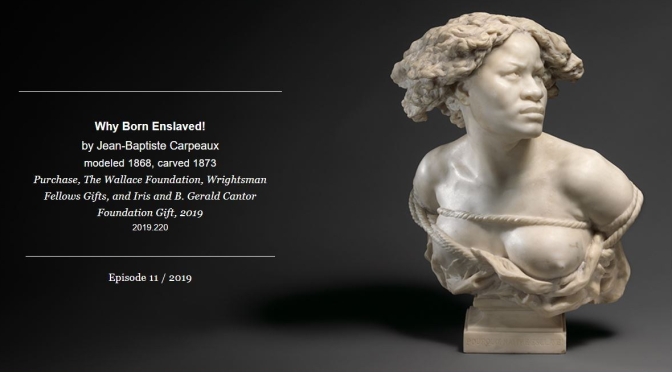 “It is critical to reckon with the power imbalance enacted when a white male artist transposes the body of a black woman into an emblem of enslavement.”

Why Born Enslaved! was first conceived in 1868 by Jean-Baptiste Carpeaux, one of the greatest French sculptors of the nineteenth century. The bust portrays a woman straining against a rope pulled taut around her arms, back, and breast. Her shoulders project forward and the right tendon of her neck protrudes as she twists her body in one direction and turns her head sharply in the other.

The figure’s defiant, uplifted gaze extends her spiraling movement and conveys her perseverance through pain as the work’s rhetorical title, inscribed on the sculpture’s base, proclaims, “Pourquoi Naitre Esclave!”

The mahout (elephant keeper), the turbaned Ottoman warriors, and the crowning crescent all allude to the Eastern origins of the elephant. Within the Kunstkammer the elephant represented rulership. This automaton clock, which strikes at both the quarter hour and the hour, is driven by a movement connected to a wheel mounted on the walkway of the howdah (saddle). On the hour, the four Muslim warriors revolve around the brickwork tower. The mahout thumps his arm up and down, as though he were leading the animal, and his counterweighted eyes move back and forth as the machine travels.

Presented to Empress Maria Theresa in Vienna in 1760, this automaton was made at the height of the “century of writing.” Written communication connected scientists, dignitaries, scholars, and artists across long distances, and the act of writing was celebrated in every form. This piece is the last in a series of increasingly complicated ones that Friedrich von Knaus produced during his tenure as Austrian court machinist; he presented other examples to dignitaries such as the French king Louis XV and Duke Charles Alexander of Lorraine.

The machine writes through the hand of the small statuette seated at its top, one of the first mechanical writing figures in human form. This video shows the mechanisms inside the sphere that produce its precise movements. Up to 107 words can be preprogrammed by the arrangement of pegs on a barrel. The figure can also be set via a hand-worked control to appear to write from dictation; this technology that presaged the first typewriter.

Duke Charles Alexander of Lorraine, who bought this automaton clock in 1777, collected luxury objects made in his realm that demonstrated local technical advances. The self-moving components of this timepiece represent the height of Flemish invention in a fashionable Neoclassical style. Mechanically complex and visually impressive, this sparkling clock was a worthy addition to the duke’s collection of timepieces and scientific instruments.

This video shows the movement of the dials for hours, minutes, and seconds; days of the month; and phases of the moon, as well as that of the seven dynamic design elements. The cross-of-Lorraine pendulum swings steadily over the main dial, underneath a dancing letter M. Above the calendar dial turns a Catherine wheel, while the four dragons supporting the obelisk flap their wings and spit pearls. Another Catherine wheel spins above the moon-phase dial, and the entire obelisk is topped by a rotating planetarium. The fourth dial shows the maker’s signature.

From a MyModernMet.com online article:

Since I work as a fine artist now, there are fewer commercial entities to please, so I’ve discovered something that should have been very obvious. If you want to engage the viewer, don’t tell them everything, encourage them to ask their own questions. An artist should not describe—he or she should interpret. If you design into your work a bit of mystery—areas where the viewer must “fill in the blanks”—you set up an unspoken dialog with your viewers and an emotional weight will begin to develop organically. This is just one example of course, but an important one.

Artist Thomas W. Schaller combines a passion for architecture and storytelling into emotional landscape watercolor paintings. Originally trained as an architect, he found himself drawn to images of the built environment and eventually left designing behind to pursue fine art on a full-time basis. His education places him in an ideal position for architecture painting. Schaller understands how to design structures and knows what attributes to include and what he should leave out. At the same time, he’s able to tap into the feelings we get from visiting a city—such as a sentimentality—to produce pieces that are both beautiful and alluring.