Enjoy a luxurious mobile living experience with all the comforts of home. The 2021 Living Vehicle combines beautiful aesthetics with the functionality of a modern home.

Excellence in design is achieved when there is nothing left to take away. Clean lines, European fixtures and marine grade influences elevate Living Vehicle to a stunning yet functional work of art.

Go where you want and do what you want. Living Vehicle is engineered to withstand the demands of even the most extreme outdoor adventures. Four-season capabilities, off-road running gear, and storage for all your toys make sure fun has no limits.

Caffeine wakes you up, and alcohol makes you nod off, right? It’s not that simple. Sleep scientist Matt Walker takes us into the eye-opening ways that these drinks affect the quantity and quality of our sleep. Sleeping with Science, a TED original series, uncovers the facts and secrets behind our nightly slumber. (Made possible with the support of Beautyrest)

Step into our galleries to experience ‘Gauguin and the Impressionists: Masterpieces from the Ordrupgaard Collection’. Explore the carefully curated collection of Wilhelm and Henny Hansen, who utilised their exceptional eye for quality to assemble works by Renoir, Monet, Degas, Morisot, Manet and Pissarro among many others. 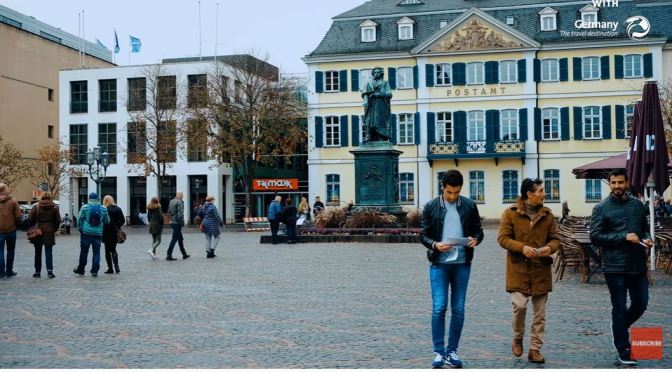 The celebration of Ludwig van Beethoven’s 250th birthday this year is reaching a crescendo in Germany. The composer and pianist was born in Bonn on December 16, 1770, and his musical legacy carries on. In this reel, we meet concert pianists putting a new spin on Beethoven’s work. Susanne Kessel, for one, put out a call to composers for 250 new piano pieces inspired by Beethoven and is now in the midst of performing them. Elsewhere, the duo known as Pianotainment is using humor and serious piano chops to make the work of the likes of Beethoven accessible to all. We wrap up this ode to Beethoven with a visit to a museum full of self-playing musical instruments. And, yes, some of them even play Beethoven.

This Great Big Story was made possible by the German National Tourism Board and BTHVN2020: https://www.germany.travel/beethoven2020

Nature reviews: Engineering yeast to produce medicines, immunity to Covid-19, and the mechanism of anaesthetic action.

The tropane alkaloids are an important class of medicine, but they are produced agriculturally leaving them vulnerable to extreme weather and world events. Now, researchers have engineered yeast to produce these important molecules. Research Article: Srinivasan and Smolke

We discuss the complex story of immunity to COVID-19, and how this may affect vaccine development. News Feature: What the immune response to the coronavirus says about the prospects for a vaccine

19:07 The molecular mechanisms of general anaesthetics

Despite over a century of use, there’s a lot we don’t know about how anaesthetics function. This week, researchers have identified how some of them they bind to a specific neuronal receptor. Research Article: Kim et al.

Whilst the Nature Briefing is on its summer holidays, we take a look at some other science from around the web. This time we discuss Elon Musk’s latest showcase of a brain-chip, and the physics behind how boats can float upside down on levitating liquid. New Scientist: Elon Musk demonstrated a Neuralink brain implant in a live pig; Business Insider: Elon Musk’s AI brain chip company Neuralink is doing its first live tech demo on Friday. Here’s what we know so far about the wild science behind it.; Research Article: Apffel et al.; Video: The weird physics of upside down buoyancy

The Mobi Nomad is a go anywhere hybrid with unrivalled inside space in its class and excel with features like full permanent bathroom, island bed, great kitchen  and 2 minute setup time. With the slide room extended the Mobi has 12.4 sq meter internal space.

Despite being built around the time of William the Conqueror almost a thousand years ago, Cardiff Castle, with its 150-foot-tall clock tower, remains an iconic feature of the Welsh capital.

Cardiff is a city and the capital of Wales. It is the United Kingdom’s eleventh-largest city. As Wales’ chief commercial centre, Cardiff is the base for the Senedd, most national cultural institutions and Welsh media.

In the year 79 CE, Pliny the Elder set out to investigate a large cloud of ash rising in the sky above the Bay of Naples. It was the eruption of Vesuvius, and Pliny did not survive.

“I think we can all empathize with someone who’s like a son, or in this case, an adopted son, trying to kind of make his own mark and escape the shadow of his father, and leave something on the world of his own.”

A trailblazing naturalist, he is best remembered today for his multivolume encyclopedia of Natural History,and we are able to retrace his final hours thanks to a vivid account by his nephew, Pliny the Younger. Inspired by his beloved uncle, the young Pliny became a lawyer, senator, poet, and representative of the emperor. His published letters are fascinating reflections on life and politics in the Roman Empire.

In this episode, Daisy Dunn, classicist and author of The Shadow of Vesuvius: A Life of Pliny,and Kenneth Lapatin, curator of antiquities at the Getty Museum, discuss the two Plinys and their profound impact on our understanding of ancient Rome.

You know you need to get enough sleep, but the question remains: How much is enough? Sleep scientist Matt Walker tells us the recommended amount for adults and explains why it’s necessary for your long-term health. Sleeping with Science, a TED original series, uncovers the facts and secrets behind our nightly slumber. (Made possible with the support of Beautyrest)

In this week’s episode of “Travels with a Curator,” Deputy Director and Peter Jay Sharp Chief Curator Xavier F. Salomon takes viewers on a journey through the grand halls of the Château de Chantilly, one of his favorite places in France. Like the Frick, Chantilly began as an opulent residence and was once the home of the Grand Condé, a cousin of Louis XIV. Today, the château houses one of the best collections of European paintings in France as well as the world-famous illuminated manuscript “Très Riches Heures du Duc de Berry.” Watch closely for a guest appearance by Jadwiga, Xavier’s kitten.

The Château de Chantilly is a historic French château located in the town of Chantilly, Oise, about 50 kilometres north of Paris.