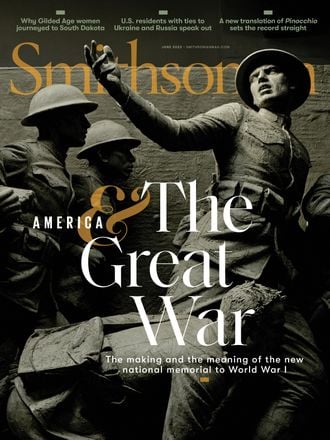 Not Far From Kyiv

To residents of Southern California with ties to the Eastern European nations, the conflict feels close to home

PHOTOGRAPHS AND INTERVIEWS BY STELLA KALININA

In a Tight Spot

Forget what you know from the cartoon. The 19th-century story, now in a new translation, was a rallying cry for universal education and Italian nationhood

Escape from the Gilded Cage

Even if her husband was a murderer, a woman in a bad marriage once had few options. Unless she fled to South Dakota

For more than a century, museum artifacts were acquired in ways we no longer find acceptable. How can we repair the damage?

Van Gogh in the Grove

Role of a Lifetime

A Brief History of Red Drink

Forget Dolly the Sheep. The birth of a mouse named Cumulina 25 years ago launched a genetic revolution

Built in the 1930s, high above the Santa Barbara coast, the mansion known as Bellosguardo was the summer home of reclusive heiress Huguette Clark, who instructed her staff to never change a thing – and they didn’t. Jane Pauley pays a visit to a fabled home constructed from a Gilded Age fortune (made famous from the bestseller “Empty Mansions”), which will open its doors to public tours for the first time later this year.

Recent events have revived a century-old border dispute between Ethiopia and Sudan over al-Fashaga—a fertile region that both countries claim as their own. Could these tensions throw the entire region into conflict?

In the 8th century BC, a kingdom grew up around the Nubian capital, Napata. In about 730 BC, the Nubian king Piankhy conquered Egypt and founded the 25th Dynasty of Kushite kings, who ruled for more than fifty years over a kingdom stretching from the Nile Delta to the confluence of the White and Blue Niles. The most famous of those kings is the pharaoh Taharqa.

The exhibition highlights the importance of this vast kingdom, located in what is now northern Sudan. It is organised in connection with the Louvre’s archaeological campaign in Sudan, which focused for ten years on the site of Muweis before moving some 30 kilometres northwards to El-Hassa, not far from the pyramids of Meroe.

John Goodall’s The Castle: A history is the much slimmer companion to his magisterial The English Castle, (2011). Partly an attempt to bring the fruits of his research to a wider audience, Goodall’s new book uses extracts and quotations as the foundation of a historical account: each short chapter features an excerpt from a primary source that seeks to illustrate a particular moment. Rather than offering an architectural or conventional narrative history, Goodall explores the concept of the castle as it has been imagined, remade and contested over time. Important castles such as the Tower of London, Kenilworth and Windsor feature throughout.

Gavin Stamp retraces the route of the old Orient Express, from London, via Paris, Vienna, Budapest, Belgrade, Bucharest, to Istanbul, in search of the treasures of ‘Old Europe’. Stamp’s adventures on and off the train are punctuated by his candid, entertaining reflections on life, the world, and the strange and wonderful people he meets.

The Côte d’Azur stands for glamour and luxury, for film festivals and stars, for yachts and villas. The most famous personalities of the last century met here. The Côte owes its unique mythos to their loves and passions.

The Côte d’Azur boasts a breathtakingly gorgeous landscape. But its mythos is more than the sum of it beautiful parts. The whole world associates the narrow coastal strip on the French Mediterranean coast with sun, stars and scandals. In Saint Tropez, a former fishing town, a new and newly sensual art of living was popularized thanks to the young Brigitte Bardot.

On the eastern part of the coast, Oscar winner Grace Kelly conquered the principality of Monaco with her marriage to Prince Rainier. The matchmaker? The Greek shipowner Aristotle Onassis, who wanted to burnish the dwarf state’s image. One of the most glamorous film festivals in the world was established in Cannes. After that, it seemed everyone came to the Côte. At the Hôtel du Cap-Eden-Roc in Antibes, the paths of the famous crossed again and again.

For 150 years the hotel has been home to artists, queens and kings, divas and stars. Since 1969, the hotel has been owned by the German industrialist family Oetker. Maja Oetker describes her personal memories of the past 50 years. To this day, the Côte d’Azur has lost none of its appeal. It is more than just a place: it is an entire mythos.

The stone structure was completed in 1345, and was built over the course of twelve years. It replaced an earlier wooden structure that collapsed in a flood in 1333. Originally, the buildings on the Ponte Vecchio housed apartments and workshops, as well as butcher shops. Later, the business premises were given to goldsmiths and silversmiths, who added several structural changes to the buildings, such as bay windows and balconies.

For over sixty years, Sayed Al-Mataany has been using thousand-year-old, Ancient Egyptian methods to carve hieroglyphs into vases and sculptures — but major blows to Egypt’s tourism industry have caused a steady decline in the number of tourists coming to Luxor to buy his ornaments. We went to Luxor in Egypt to see how his business is still standing. Sayed does not have a website. He sells his work locally in Luxor.

This exhibition touches on the history and culture of ramen, but its primary goal is to spotlight the donburi itself. To examine donburi more closely, these bowls are “dissected” and observed in detail, like a specimen. Then, in the hands of thirty artists, the bowls serve as blank canvases on which the fun, the deliciousness and the many possibilities of ramen are uniquely expressed. In addition, the exhibition introduces the region of Mino – Japan’s largest producer of porcelain ramen bowls – and its long and important history of ceramic production, from tea bowls to house wares to donburi.

Ramen – wheat noodles served in soup with toppings – were introduced to Japan in the late 19th century, grew popular over the following decades and became deeply connected with the culture of postwar Japan. A fast food served in a single bowl, the hot noodle soup can satisfy hunger for a reasonable price. Originally Chinese, this everyday dish has evolved differently in each region of Japan, featuring diverse ingredients and seasonings.