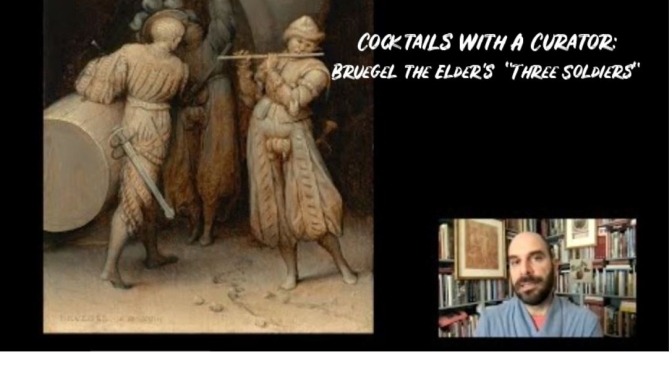 n this week’s episode of “Cocktails with a Curator,” Deputy Director and Peter Jay Sharp Chief Curator Xavier F. Salomon discusses “The Three Soldiers” by Pieter Bruegel the Elder, one of only a few works by the artist outside Europe. Bruegel is best known for his lively and often comical peasant scenes, but here he takes as his subject three landsknechts, or German mercenary foot soldiers.

Currently on view on the second floor of Frick Madison, this grisaille painting shows a drummer, a standard-bearer, and a fifer outfitted in flamboyant costume (and presumably urging their fellow soldiers into battle). This week’s complementary cocktail is the Radler, a mixture of lemonade and lager favored in German-speaking lands north of the Alps.

To view this painting in detail, please visit our website: https://www.frick.org/bruegel3soldiers

In this week’s episode of “Cocktails with a Curator,” Curator Aimee Ng explores the turbulent life of the woman portrayed in James McNeill Whistler’s serene “Harmony in Pink and Gray: Portrait of Lady Meux,” currently on view on the fourth floor of Frick Madison. A former bartender and actress, Lady Meux was shunned by London polite society even after she married Sir Henry Bruce Meux, heir to a huge brewery fortune. This week’s complementary cocktail is a refreshing Mummy, a nod to her extensive collection of some 1,800 Egyptian and Assyrian objects, including an infamous mummy of Nesmin.

To view this painting in detail, please visit our website: https://www.frick.org/ladymeux

In this week’s episode of “Cocktails with a Curator,” Deputy Director and Peter Jay Sharp Chief Curator Xavier F. Salomon focuses on Francesco da Sangallo’s “St. John Baptizing,” which can be found at the very center of the third floor of Frick Madison. Commissioned in the 16th century for a church in the Tuscan town of Prato, the bronze statuette has been installed atop a facsimile of the marble holy water font on which it was originally displayed, allowing visitors to see it as it was meant to be viewed. This week’s complementary cocktail is the White Negroni, a modern twist on a classic Florentine cocktail.

To view this painting in detail, please visit our website: https://www.frick.org/sangallobaptizing

In this week’s episode of “Cocktails with a Curator,” join Deputy Director and Peter Jay Sharp Chief Curator Xavier F. Salomon as he delves into the mystery of three rare Saint-Porchaire objects currently on view in a room featuring enamels and clocks on the third floor of Frick Madison. Much remains unknown about 16th-century Saint-Porchaire ware—exquisite pieces inlaid with colored clay and embellished with three-dimensional reliefs—but an ongoing Frick research project recently identified an exciting potential link between the great French ceramicist Bernard Palissy and a lizard on one of the ewers at the Frick. This week’s complementary cocktail is a classic French American drink, the Boulevardier.

To view this painting in detail, please visit our website: https://www.frick.org/stporchaireware 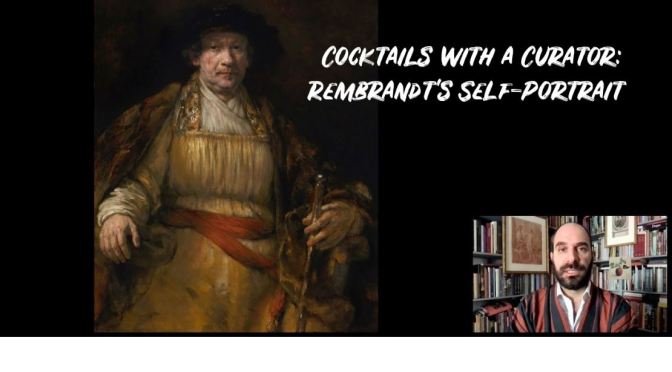 In this week’s episode of “Cocktails with a Curator,” Deputy Director and Peter Jay Sharp Chief Curator Xavier F. Salomon discusses the life of the celebrated Dutch painter Rembrandt Harmensz. van Rijn by examining his largest self-portrait, the centerpiece of a room devoted to Rembrandt on the second floor of Frick Madison. Painted when he was deep in debt and facing financial ruin, the artist nonetheless presents a grand vision of himself. This week’s complementary cocktail is a whiskey sour.

To view this painting in detail, please visit our website: https://www.frick.org/rembrandtselfpo…

In this week’s episode of “Cocktails with a Curator,” savor the exquisite details of “Comtesse Daru,” the only painting in the Frick’s collection by renowned French neoclassical painter Jacques-Louis David. Join Curator Aimee Ng as she delves into the history of how this lovely, intimate portrait came to be painted by an artist largely known for producing monumental works in the service of Napoleon. This week’s complementary cocktail, the Orange Blossom, is inspired by the orange-blossom tiara that adorns the sitter’s head.

To view this painting in detail, please visit our website: https://www.frick.org/comtessedaru

In this week’s episode of “Cocktails with a Curator,” Deputy Director and Peter Jay Sharp Chief Curator Xavier F. Salomon explores Piero della Francesca’s “St. John the Evangelist,” one of the few major works by the Renaissance artist in the United States. This striking panel was originally part of a polyptych commissioned for the high altar of Sant’Agostino in Piero’s hometown of Borgo San Sepolcro. The polyptych was probably dismembered in the mid-16th century, less than one hundred years after it was made, and many fragments are now lost. Enjoy this week’s program with a bourbon-powered Saint cocktail or a refreshing Grapefruit Citrus mocktail.SHOW LESS

In this week’s episode of “Cocktails with a Curator,” journey to sixteenth-century Rome with Deputy Director and Peter Jay Sharp Chief Curator Xavier F. Salomon as he discusses El Greco’s “Vincenzo Anastagi,” one of three important paintings by the Renaissance artist in the Frick’s collection. Born in Crete, El Greco spent a formative seven years in Rome, where he painted this rare, full-length portrait of a minor aristocrat from Perugia then serving as Sergeant Major of Castel Sant’Angelo. Look closely at this unusual painting while sipping an Ouzo Lemonade, which gets its kick from the anise-flavored spirit popular in the artist’s birthplace.

To view this painting in detail, please visit our website: https://www.frick.org/anastagielgreco