This exhibition celebrates the addition of nine masterpieces to the French national collections – six paintings, two sculptures and a sketchbook – via the country’s gifts-in-lieu scheme, which was introduced on 31 December 1968, allowing inheritance tax to be paid in kind. This unique acquisition mode is key to the very identity of Musée Picasso, which was founded in 1979 specifically to house the donation made by Pablo Picasso under this system.

Pablo Ruiz Picasso was a Spanish painter, sculptor, printmaker, ceramicist and theatre designer who spent most of his adult life in France. 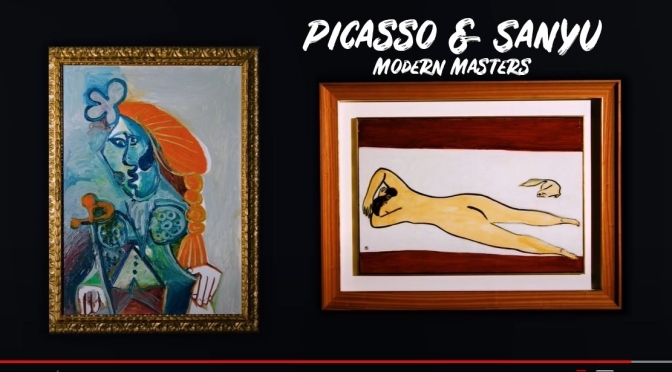 Pablo Picasso is perhaps the Modern master most admired by Asian artists. His commitment to breaking with tradition resonated deeply with Chinese modernist pioneer Sanyu. In this episode of Expert Voices, our Head of Modern Art in Asia, Felix Kwok, introduces masterworks by both artists, which will headline our upcoming Beyond Legends: Modern Art Evening Sale (18 April | Hong Kong). ‘Nu Avec un Pékinois’ is a masterpiece from Sanyu’s post-war period that reflects themes of love and perseverance and ‘Buste de Matador’ from the 1970s is the first painting in Picasso’s final Matador and reflects an urgency in the face of mortality. 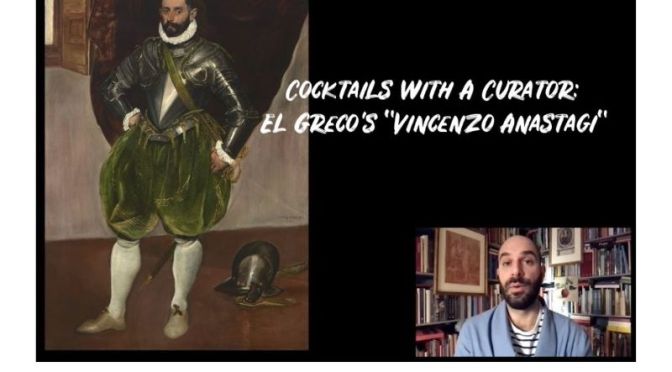 In this week’s episode of “Cocktails with a Curator,” journey to sixteenth-century Rome with Deputy Director and Peter Jay Sharp Chief Curator Xavier F. Salomon as he discusses El Greco’s “Vincenzo Anastagi,” one of three important paintings by the Renaissance artist in the Frick’s collection. Born in Crete, El Greco spent a formative seven years in Rome, where he painted this rare, full-length portrait of a minor aristocrat from Perugia then serving as Sergeant Major of Castel Sant’Angelo. Look closely at this unusual painting while sipping an Ouzo Lemonade, which gets its kick from the anise-flavored spirit popular in the artist’s birthplace.

To view this painting in detail, please visit our website: https://www.frick.org/anastagielgreco

This image of a young woman and her mirror reflection is riotous in color and chockablock with pattern. It is one of the last in a major series of canvases that Picasso created between 1931 and 1932. According to The Museum of Modern Art’s founding director, Alfred H. Barr, Jr., Picasso said he “preferred this painting to any of the others,” which speaks to the painting’s dazzling visual and thematic complexity. Its primary subject is the time-honored artistic theme of a woman before her mirror, reinvented in strikingly modern terms. The girl’s smoothly painted profile, in a delicately blushing pink-lavender, abuts a heavily built-up and garishly colored frontal view in yellow and red. Allusions to youth and old age, sun and moon, light and shadow are compressed into a single multivalent face.

In the popular imagination, possibly no other artist’s work is more recognizable than that of Salvador Dalí. Indeed, for many he is the ultimate mad artist, whose singular vision remorselessly probed his own psychological depths. His nightmarish visions and bizarre landscapes express the angst and turbulence of the twentieth century.

Dalí’s creativity embraced many different modes of expression and was never constrained by any one style. Over eight decades, the prodigious range of Dalí’s activity spanned every conceivable medium, from painting and drawing to sculpture, film, furniture, books, stage design and jewelry, not to mention his highly eccentric public persona, which could be considered an art form in itself.

Selected by curator and art historian Paul Moorhouse, Assouline presents Salvador Dalí: The Impossible Collection, spotlighting 100 works by this extraordinary creative mind, exploring Dalí’s inspirations and array of influences, from Old Masters to realism, Impressionism, Fauvism and Cubism as well as experimental approaches that delved into his obsessions with religion, science and stereoscopy.

Paul Moorhouse is a London-based art historian and curator. Currently chief executive of the Anthony Caro Studio, he was senior curator and head of displays at the National Portrait Gallery, London (2005–17) and senior curator at the Tate (1985–2005), where he was closely involved with the creation of Tate Modern and Tate Britain. He has curated numerous exhibitions internationally and published extensively, with books and exhibition catalogues on major modern and contemporary artists, including Anthony Caro, Salvador Dalí, Alberto Giacometti, Howard Hodgkin, Hans Hofmann, Richard Long, Gerhard Richter, Bridget Riley, Cindy Sherman and Andy Warhol. 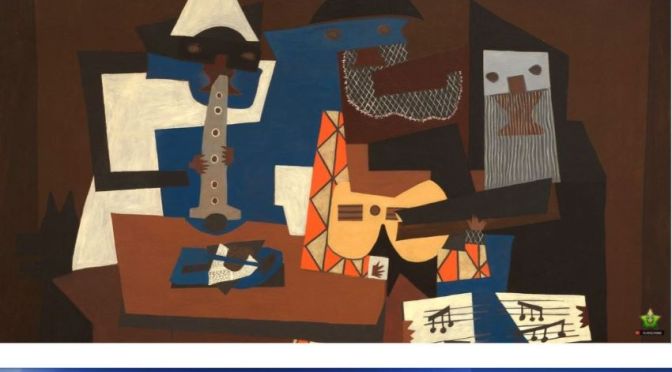 Three Musicians, 1921 by Pablo Picasso Three Musicians is a large painting measuring more than 2 meters wide and high. It is painted in the style of Synthetic Cubism and gives the appearance of cut paper. Picasso paints three musicians made of flat, brightly colored, abstract shapes in a shallow, boxlike room.

On this episode of Art Institute Essentials Tour, take a closer look at The Old Guitarist, painted by Pablo Picasso between late 1903 and early 1904. In the paintings of Picasso’s Blue Period (1901-04), the artist restricted himself to a cold, monochromatic blue palette, flattened forms, and emotional, psychological themes of human misery and alienation. This painting reﬂects the then twenty-two-year-old Picasso’s personal struggle and sympathy for the plight of the downtrodden.

Between 13 December 1954 and 14 February 1955, Picasso painted a series of fifteen canvases based on Eugène Delacroix’s masterwork Les femmes d’Alger, each of which he assigned an identifying letter from A to O. Together, these paintings constitute Picasso’s single greatest achievement in the decades following the end of the Second World War. They represent his first comprehensive appropriation and thoroughgoing exploration of an important painting by an earlier artist, as well as the most focused analysis he had done since the war years of the female figure set within a specific spatial environment.

Picasso painted the present Femmes d’Alger, Version F on 17 January 1955, around the halfway point in the cycle. It is the culminating, most fully resolved canvas from the first phase of the series, when Picasso favored medium-sized formats for his protean explorations.

Manet called him “the greatest painter of all.” Picasso was so inspired by his masterpiece Las Meninas that he painted 44 variations of it. Francis Bacon painted a study of his portrait of Pope Innocent X. Monet and Renoir, Corot and Courbet, Degas and Dalí…for so many champions of art history, the ultimate soundboard was—and remains—Diego Rodríguez de Silva y Velázquez (1599-1660).

This updated catalog raisonné brings together Velázquez’s complete works, jaw-droppingly reproduced in extra-large format, with a selection of enlarged details and brand new photography of recently restored paintings, achieved through the joint initiative of TASCHEN and Wildenstein. The book’s dazzling images are accompanied by insightful commentary from José López-Rey on Velázquez’s interest in human life and his equal attention to all subjects, from an old woman frying eggs to a pope or king, as well as his commitment to color and light, which would influence the Impressionists over two centuries later.

José López-Rey (1905–1991) taught Italian Renaissance at the University of Madrid and worked as an art advisor for the Spanish Ministry of Education. Before the end of the Spanish Civil War, he emigrated to the USA, where he resumed his teaching career at the Institute of Fine Arts, New York. In 1973 he was awarded emeritus status. López-Rey was a corresponding member of the Hispanic Society of America and a consultant and contributor to several international art journals, including the Gazette des Beaux Arts and Art News.

Odile Delenda, graduate of the École du Louvre, served as professor there, and then as deputy head of the department of paintings at the Musée du Louvre until 2007. She has collaborated on several exhibitions of old master paintings. A research fellow at the Wildenstein Institute in Paris since 1990, she has continued her study of Spanish art from the Siglo de Oro. She is, among other works, the author of Vélasquez, peintre religieux (1993) and, under the auspices of the Wildenstein Institute, the first critical catalogue raisonné of the painted oeuvre of Francisco de Zurbarán and his studio (2009/10).

Experience our Picasso and Paper exhibition from your own home in this video tour of the galleries, created before the Royal Academy had to close its doors due to coronavirus.

Picasso didn’t just draw on paper — he tore it, burnt it, and made it three-dimensional. From studies for ‘Guernica’ to a 4.8-metre-wide collage, this exhibition brings together more than 300 works on paper spanning the artist’s 80-year career.