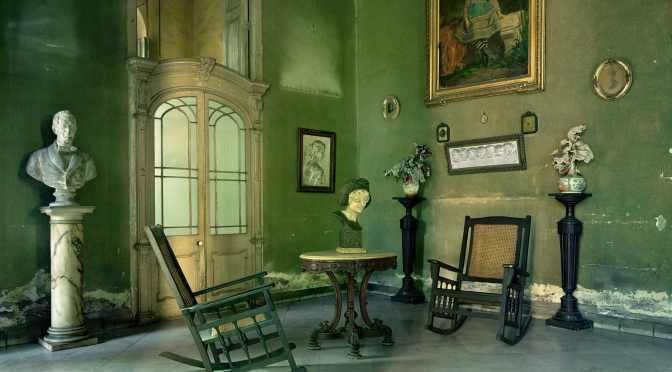 Cuba, a place known for it’s unique mix of cultural and artistic influences along with it’s diverse architecture, repeatedly drew Eastman to work there throughout the years. Eastman’s lavish monumental photographs of the opulent colonial and Art Deco architecture of Havana impart on the viewer magnificently decorated rooms bathed in romantic Baroque light.

Seemingly caught in the rift of time and bearing the resulting mark making, these decadent and warm inviting spaces seemingly take on the role of storyteller, serving witness to a time now passed.

For five decades, Michael Eastman has explored the interiors and facades in diverse geographical locations producing photographs unified by their visual precision, monumentality, and painterly use of color. Eastman’s affection for the vernacular is reflected in the resultant photographs, rich in narrative and embodied with an intrinsic sense of place and time.

Born in 1947 in St. Louis, Missouri, Eastman studied at the University of Wisconsin. He is the recipient of the National Endowment for the Arts Grant, National Addy Award, and a Paris Photo BMW Finalist Prize. His images have appeared in Time, Life, Art in America, New York Times, and American Photographer. Eastman’s work is in numerous private and public collections, including The Metropolitan Museum of Art, NY; San Francisco Museum of Modern Art, CA; Art Institute of Chicago, IL; Los Angeles County Museum of Art, CA; High Museum of Art, Atlanta, GA; Saint Louis Art Museum, MO; and the International Center of Photography, NY. His publications include Havana (Prestel, 2011), Vanishing America (Rizzoli, 2008), and Horses (Knopf, 2003).

Lebanon’s age-old abandoned mansions have been left to decay but British photographer James Kerwin still sees their charm and magnificence.

Shot on film with a Linhof view camera, the collection is the outcome of five years of travel and investigation. Complete with a practical map and explanatory essay, its castles tell the story of 400 years, unfolding through the feudal Middle Ages into the 15th century.

Follow photographer Frédéric Chaubin as he embarks on a unique, century-spanning journey through Europe. Featuring images of more than 200 buildings in 21 countries, Stone Age presents the history and architecture of the most magical medieval castles of the continent in an unprecedented collection.

Building on the success of his foray into Soviet design with CCCP, Chaubin once again documents the afterlife of highly rational structures that seem out of place in a modern-day world. Precursors of Brutalism, these castles value function over form and epitomize the raw materials and shapes that would go on to define so much of architectural history.

Dreamlike flowers, a dragonfly with ‘invisible’ wings and a startlingly geometric overheard view of a garden were among the winners in the 2021 RHS Photographic Competition.

The overall winner was Oliver Dixon for his image of the flower garden at Loseley Park, Surrey, taken with a drone. It’s an image which really captures the mix of Man and Nature which goes in to a great garden.

“Some of the largest and most wonderful creatures in Africa have become very dear to me over the years,” Schmeisser writes. His book of portraits carries two messages. “It [is] a homage and warning at the same time—a visual message with the aim of sharpening our clouded view of the one, infinitely complex and vulnerable nature and to recognize which treasures we are about to irretrievably lose,” he writes.

There are exactly two black rhinos left in the world, a subspecies of the white rhino, the very last of their kind. In this deeply poignant tribute, photographer Joachim Schmeisser presents these rhinos as well as other wild animals in the Amboseli National Park in Kenya, where Maasai tribespeople ensure that nobody endangers them. With his breathtaking black-and-white images, Schmeisser brings us up close to these extraordinary and endangered creatures, creating a powerful document of nature’s splendor and fragility.

Presented by British art historian Jacky Klein and entertainer Nish Kumar, A Year in Photos from the Sony World Photography Awards 2021 celebrates the work of the top winners in one of the world’s biggest photography competitions. Including interviews and behind-the-scenes footage with distinguished photographers, rising talents, and industry-leading experts, this 60-minute feature takes viewers on a journey across the globe to explore powerful contemporary stories and artistic excellence. View our full digital programme by visiting our website at https://www.worldphoto.org/announceme… 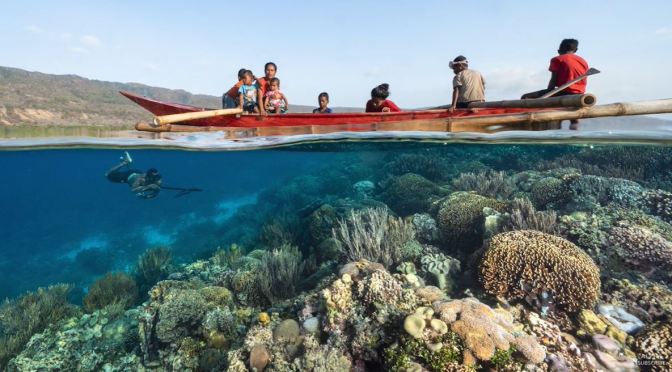 Go behind the scenes of SeaLegacy’s conservation journey, starting with an incredible Blue Whale photoshoot in the waters off of Timor-Leste. Photographers, filmmakers, conservationists and #SonyArtisan​ members Cristina Mittermeier, Paul Nicklen and Andy Mann share how impactful storytelling can make a positive impact on essential conservation efforts to protect our planet. Learn more about the conservation efforts in Timor-Leste: https://only.one/

Timor-Leste, or East Timor, a Southeast Asian nation occupying half the island of Timor, is ringed by coral reefs teeming with marine life. Landmarks in the capital, Dili, speak to the country’s struggles for independence from Portugal in 1975 and then Indonesia in 2002. The iconic 27m-tall Cristo Rei de Dili statue sits on a hilltop high over the city, with sweeping views of the surrounding bay.

Follow us deep into the woods on a journey that showcases new ways to escape into Europe’s vast and eclectic landscape. With an emphasis on environmentally-friendly travel, Stay Wild shines the light on places for curious, conscious travelers to rest and recharge.

For the first time in decades, our worlds got smaller, but for many, travel limitations have fostered a newfound appreciation for regional vacations. Are you ready and willing to digitally detox? Leave the city behind you, switch off, reconnect with yourself and nature, and fall in love with the world again through the pages of Stay Wild.

Launched in 2010, Canopy & Stars is an online platform where people can book stays in weird and wonderful locations all over Europe. With authenticity, creativity and a connection to nature at its core, Canopy & Stars strive to facilitate meaningful experiences that have a positive impact on the environment.