The 2022 season of envy and bitterness is upon us, because the unaffordable convertible sports cars are finally hitting the streets. Today we will focus our window-shopping efforts on the all-new and facelifted models that once again will be setting even higher design and performance standards within the class. 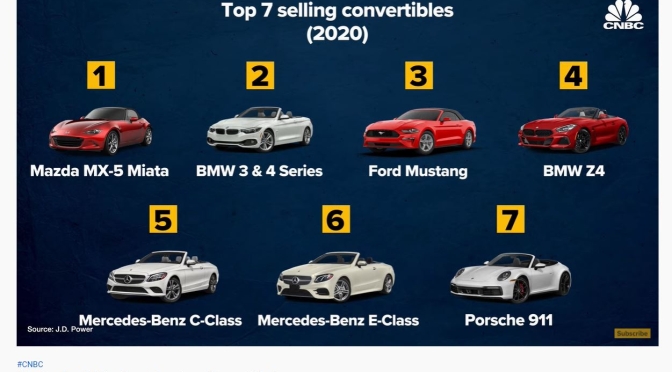 Rising in popularity in the 1950s and 1960s, the convertible car is an automotive American icon. It was a vehicle meant for leisure and fun. Some of the most iconic models throughout history were convertibles, such as the Chevrolet Corvette and the Ford Mustang. However, in the last few years, convertibles have been slowly declining in popularity. Along with rising prices, American car buyers, especially those with children, value practicality and functionality over looks and leisure, leading their interest towards SUV’s and midsize sedans. In 2021, convertibles make up only 0.46% of new car sales. Can the iconic design stand the test of time?

Since its founding in 1984, the team behind Eagle has steadily worked their dedication into an obsession, with the outcome being the last word in the world of the Jaguar E-Type. Unlike many restoration specialists, Eagle keeps all the work in-house, and none of it is rushed.

Indeed Eagle CEO Henry Pearman says it takes the team nearly 4,000 hours to complete one of the company’s ground-up, full-on Eagle E-Types, and while they aren’t for those on a tight budget, there is clear evidence of the claim that the business is foremost driven by passion, not profits. A purely commercial endeavor would find ways to cut costs and hurry the process, but the completed cars—whether they be restorations or bespoke commissions—that leave Eagle’s countryside compound in Sussex are not just faultless E-Type specimens, they are examples of what can be achieved after decades of refinement and accumulated knowledge. Nobody knows these cars better, and in that same vein, nobody is building them better.

On “My Car Story” we’re in the West Suburbs of Chicago IL on 11-5-20. We’re looking at a 1957 Ford Fairlane 500 Skyliner Convertible in Flame Red & Raven Black Paint. The car comes with the factory 292 CI V8 “Y Block” engine. The car’s Owner is Don Walters. Don’s had this car since 2000. He shares he had one like this when he met his wife. The car features the “Retractable Top” and Don shares back in the 1950’s known as the “Hideaway Hard Top”. He found this one in a junk yard and did all the restoration work himself in four years. Don uses this car as his daily driver.

Join President David Gooding as he takes one of the all-time great Ferraris out on the open road. After successfully completing multiple editions of the California Mile and Colorado Grand and taking home top prizes from Cavallino Classic and Pebble Beach Concours d’Elegance®, the quality and beauty of 0937 GT is undeniable.

This outstanding covered headlight example will be offered at The Amelia Island 2020 auction with the ultra-rare factory hardtop. 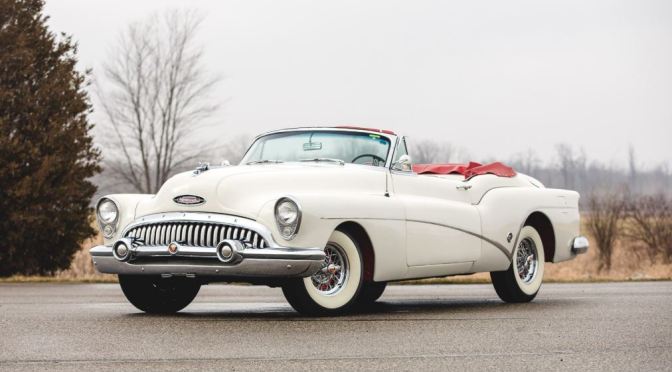 The Buick Skylark is a passenger car produced by Buick. The model was made in six production runs, during 46 years, over which the car’s design varied dramatically due to changing technology, tastes and new standards implemented over the years.

Created to mark Buick’s 50th anniversary, the Roadmaster Skylark joined the Oldsmobile 98 Fiesta and Cadillac Series 62 Eldorado as top-of-the-line, limited-production specialty convertibles introduced in 1953 by General Motors to promote its design leadership. Of the three, the Skylark’s run of 1,690 units proved the most successful, and an amazing sales feat considering the car’s 1953 list price of slightly in excess of US$5,000 was over 50% more than the well-equipped US$3,200 Roadmaster convertible on which it was based. Nevertheless, many languished in dealer showrooms and were eventually sold at discount.

Production ran for two years. Based on the model 76R two-door Roadmaster convertible, the 1953 Skylark (designated model 76X) had identical dimensions (except height), almost identical appearance, shared its drive train, and had all its standard equipment, plus its few remaining options, including power windows, power brakes, full carpeting, and a “Selectronic” AM radio. Only A/C was not offered, unnecessary in either convertible. 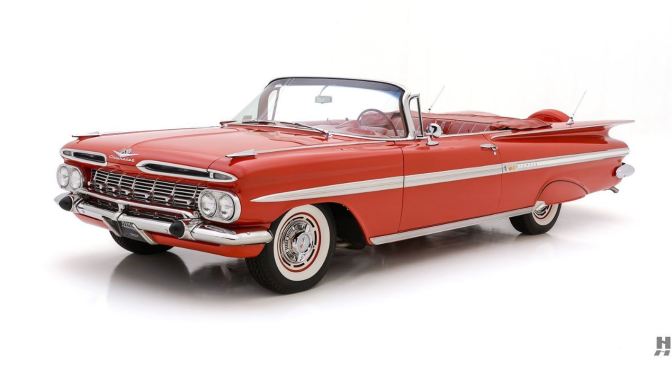 The Chevrolet Impala is a full-size car built by Chevrolet for model years 1958 to 1985, 1994 to 1996, and 2000 onward. The Impala is Chevrolet’s popular flagship passenger car and is generally among the better selling American made automobiles in the United States.

The 1959 Chevrolet Impala was redesigned. Sharing bodyshells with lower-end Buicks and Oldsmobiles as well as with Pontiac, part of a GM economy move, the Chevrolet’s wheelbase was 1-1/2 inches longer. Using a new X-frame chassis, the roof line was three inches lower, bodies were two inches wider, and curb weight increased. Its tailfins protruded outward, rather than upward. The taillights were a large “teardrop” design at each side, and two slim-wide nonfunctional front air intake scoops were added just above the grille,

The Impala became a separate series, adding a four-door hardtop and four-door sedan, to the two-door Sport Coupe and convertible. Sport Coupes featured a shortened roof line and wrap-over back window. The standard engine was an I6, while the base V8 was the carryover 283 cu in (4.6 L), at 185 hp (138 kW). Optional were a 283 cu in with 290 hp (220 kW) and 348 cu in (5.7 L) V8 up to 335 hp (250 kW). Standard were front and rear armrests, an electric clock, dual sliding sun visors, and crank-operated front vent windows. A contoured hooded instrument panel held deep-set gauges. A six-way power seat was a new option, as was “Speedminder”, for the driver to set a needle at a specific speed and a buzzer would sound if the pre-set was exceeded.

The Cord 810, and later Cord 812, was a luxury automobile produced by the Cord Automobile division of the Auburn Automobile Company in 1936 and 1937. It was the first American-designed and built front wheel drive car with independent front suspension. It followed the 1934 Citroën Traction Avant and the Cord L-29, both of which also had front wheel drive. Both models were also the first to offer hidden headlights. 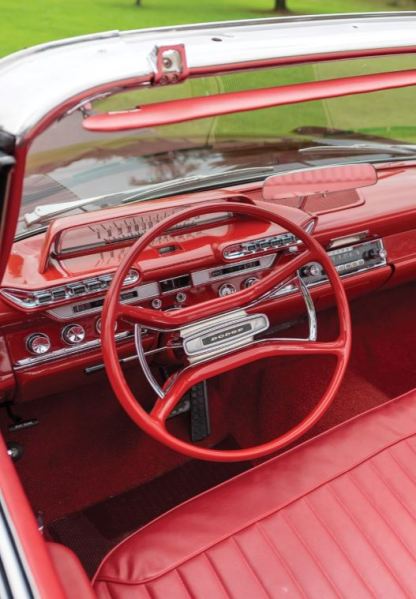 For the 1961 model year, the Dart continued as the smallest full-size Dodge. It retained the 118 in (2,997 mm) wheelbase, and was restyled to emulate the larger Polara. The same three trim levels were available: the premium Phoenix, mid-range Pioneer, and base Seneca. Once again, wagons shared the Polara’s 122 in/310 cm wheelbase; they also shared the Polara’s unique side-mounted taillights.

The Dodge Dart is a line of automobiles marketed by Dodge from the 1959 to 1976 model years in North America, with production extended to later years in various other markets.

The Dart name originally appeared on a 1956 Chrysler show car featuring a streamlined body designed by the Italian coachbuilder Carrozzeria Ghia that was later modified and renamed the Dart Diablo. The production Dart was introduced as a lower-priced, full-size Dodge in 1960 and 1961, became a mid-size car for 1962, and then was a compact from 1963 to 1976. 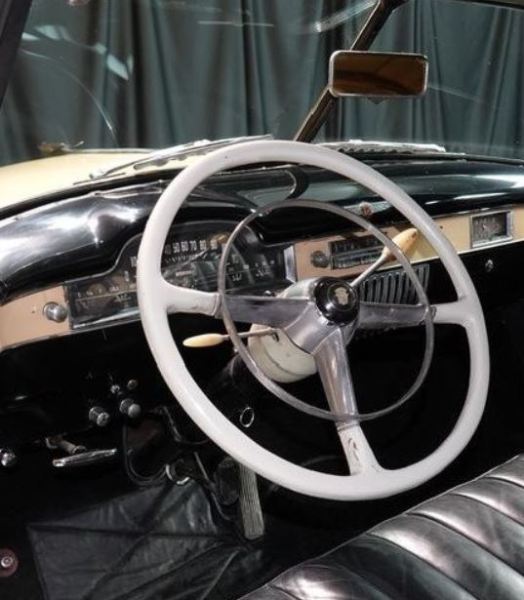 The Cadillac Series 62 is a series of cars which was produced by Cadillac from 1940 through 1964. Originally designed to replace the entry level Series 65, it became the Cadillac Series 6200 in 1959, and remained that until it was renamed to Cadillac Calais for the 1965 model year. The Series 62 was also marketed as the Sixty-Two  and the Series Sixty-Two.

The Cadillac Series 62 Coupe de Ville was introduced late in the 1949 model year. Along with the Buick Roadmaster Riviera, and the Oldsmobile 98 Holiday, it was among the first pillarless hardtop coupes ever produced.mAt $3,496 it was only a dollar less than the Series 62 convertible, and like the convertible, it came with power windows standard. It was luxuriously trimmed, with leather upholstery and chrome ‘bows’ in the headliner to simulate the ribs of a convertible top.