Country Life Magazine, May 14, 2022 – The area around Washington DC isn’t the obvious choice for holidaymakers crossing the Atlantic, but as Sophia Constant discovered it offers a huge range of wonderful options — particularly if you pencil it in now for the autumn.

Start in Winchester, Virginia, the oldest city west of the Blue Ridge Mountains, which famously changed hands between Unionists and Confederates 72 times during the Civil War. Over 15 million Americans can trace an ancestor that travelled through Winchester on the wagon-way trail from Philadelphia to the American West. Take the Taste Winchester History tour through the historic downtown’s restaurants and bars. Explore The Mall, where original buildings and classic facades have been restored to look exactly as in the 1800’s. Don’t miss the Beaux Arts Library, Post Office, Union Bank, Court House, Clock Tower, and The Museum of The Shenandoah Valley’s 200-year old house, museum and gardens. 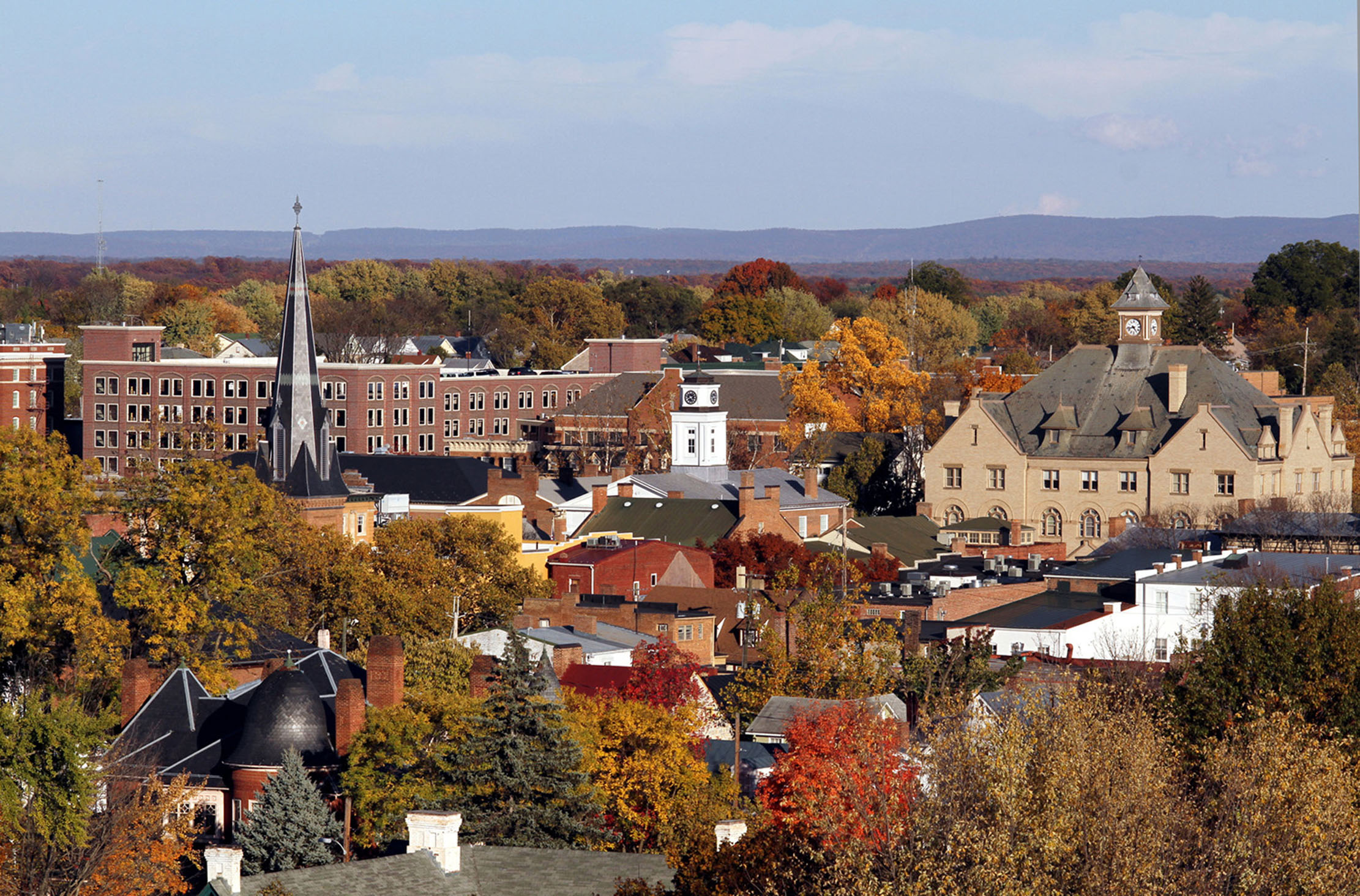 Winchester in Fall. The American one, not the Hampshire one. Credit: Capital Region USA

The Shenandoah Valley’s winding country roads pass colonial-style houses, vast orchards, farms and picket fences. Enjoy gorgeous hills and forests via hiking trails, including Sky Meadows and Eagle Rock. Gastronomy is a major part of the experience. Tour Winchester Ciderworks to taste experimental blends: blackcurrant and ginger, or even turmeric chai anti-inflammatory cider. For homemade pies and cakes, head to The Homestead Farm at Fruit Hill Orchard, a fourth generation farming family’s store, set in an old carriage barn. Their BBQ and Bluegrass Night is an authentic experience, where local musicians jam on the porch and anyone’s welcome to join. The drive through Middletown is particularly striking; a half-pipe valley with mountains rising up on either side. Time this over lunch at Shaffer’s BBQ, a dilapidated gas station transformed into a restaurant serving delectable on-the-go southern cuisine. Shaffer’s sits on a Civil War battle site, Cedar Creek (1864), where annual re-enactments take place, including 3000 people, cavalry and heavy artillery

“The largest genuine Maryland oyster—the veritable bivalve of the Chesapeake, still to be had at oyster roasts down the river and at street stands along the wharves—is as large as your open hand,” wrote Mencken in 1913. “A magnificent, matchless reptile! Hard to swallow? Dangerous? Perhaps to the novice, the dastard. But to the veteran of the raw bar, the man of trained and lusty esophagus, a thing of prolonged and kaleidoscopic flavors, a slow slipping saturnalia, a delirium of joy!”

H.L. MENCKEN WAS ONTO SOMETHING when he declared the Chesapeake Bay the “immense protein factory.” Abundant with marine life, the nation’s largest estuary has fed its inhabitants for millennia. And while there have always been crabs and rockfish, one species in particular has stood out as an especially vital source of edible and ecological significance. Ugly, strange, sexy, controversial—the small but mighty oyster.

We know, we know. They’re not for everyone. But for anyone living in Maryland—let alone in Baltimore, which was once known as Oyster City—the peculiar, polarizing, pivotal creature is more than just a slippery shellfish. In fact, it’s quite worthy of the title “natural wonder:” a tiny filter feeder so environmentally advantageous that it could once clean the entire bay in a matter of days. A teeny reef builder whose homemade habitats provide shelter for other species but also protection from natural disasters and climate change. A tasty specimen of seafood that built towns, ignited wars, and served as an economic powerhouse—forever imprinting on our cuisine and sense of place.

“Sunday Morning” takes us among the wild horses of Assateague Island National Seashore off the Maryland and Virginia coast. Videographer: Michael Clark.

Assateague Island is a 37-mile long barrier island located off the eastern coast of the Delmarva Peninsula facing the Atlantic Ocean. The northern two-thirds of the island is in Maryland while the southern third is in Virginia.

Baltimore is a major city in Maryland with a long history as an important seaport. Fort McHenry, birthplace of the U.S. national anthem, “The Star-Spangled Banner,” sits at the mouth of Baltimore’s Inner Harbor. Today, this harbor area offers shops, upscale crab shacks and attractions like the Civil War–era warship the USS Constellation and the National Aquarium, showcasing thousands of marine creatures.

Maryland and Delaware are two small states of great historical significance. Highlighted by the great bays of the eastern seaboard: Chesapeake and Delaware, both states are defined by the legacies of their colonial pasts. This aerial journey reveals their giant stature in the history of America.

The Most Beautiful Libraries in the World

While We All Know That You Shouldn’t Judge a Book by Its Cover, This is One Case in Which Evaluating Something on Its Appearance is Not Only Accepted, but Encouraged, These Libraries Are Known for Noteworthy Exteriors—think Soaring Architecture With Inspiring Interiors, and That’s Nothing Compared to the Millions of Books Housed Within Their Walls. So Whether You’re a Bookworm or an Architecture Lover, Start Adding These Beautiful Libraries to Your Must-visit List.

The Library of El Escorial, San Lorenzo De El Escorial, Spain Not Only is This Spanish Library a Work of Art, It’s Also Part of a Unesco World Heritage Site. Originally Commissioned by King Philip II, the Library’s Most Dazzling Feature is a Series of Seven Frescoes That Depict the Liberal Arts (Music, Rhetoric, Astronomy, and So on). The Town of San Lorenzo De El Escorial, Which is About 45 Minutes Outside of Madrid, Has Long Been a Favorite of Spanish Royals, and There’s Plenty More to See Here Beyond the Library, Including a Monastery, Gardens, and the Pantheons of Former Princes and Kings.

George Peabody Library, Baltimore, Maryland The George Peabody Library (Part of Johns Hopkins University) Contains Over 300,000 Volumes Stacked in Five Decorative Tiers. The Books Are Impressive, Sure, but the Cathedral Like-atrium, Marble Floors, and Wrought-iron Details Are the Main Draw Here. Is It Any Wonder the Library Has Become One of the Most Popular Wedding Venues in Baltimore?

Strahov Monastery Library, Prague, Czech Republic The Strahov Monastery in Prague Was Originally Founded in 1143. Despite Wars, Fires, and Other Disasters, the Order Endured and Built Its Library in 1679. The Library’s Best-known Features Are Its Remarkable Ceiling, Which is Covered in Biblical Frescoes, and the “Compilation Wheel” That Can Turn and Rotate Shelves in Order to Make Books Easier to Find Without Knocking Any of Them Over.

Library of Alexandria (Bibliotheca Alexandrina), Egypt Alexandria Was Once Home to the Most Famous Library in the World. Now, Egypt Pays Homage to Its Biblio-heritage With This Sleek Granite Building. The Circular Structure, Designed by Norwegian Firm Snøhetta, is Covered in Carvings Done by Local Artists and Sits Next to a Large Reflecting Pool. Although There Are Plenty of Books in Three Languages (Arabic, French, and English), There Are Also Museums, a Planetarium, and a Lab Dedicated to Restoring and Preserving Ancient Manuscripts.