The bloc’s agreed-to embargo would exempt imports via pipeline and mark a sixth sanctions package. 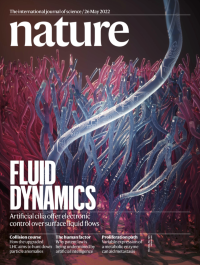 Cilia are characterized by slender, threadlike projections, which are used by biological organisms to control fluid flows at the microscale. Attempts to mimic these structures and engineer cilia-like systems to have broad applications have proved problematic. In this week’s issue, Wei Wang and colleagues present electronically controlled artificial cilia that can be used to create flow patterns in near-surface liquids. The researchers use surface-mounted platinum strips, each about 50 micrometres long, 5 micrometres wide and 10 nanometres thick, and capped on one side with titanium. Applying an oscillating potential with an amplitude of around 1 volt to the cilia drives ions on to and off of the exposed platinum surface. These ions create asymmetric forces that generate a beating pattern that can be used to pump surface liquids in various flow geometries. The cover shows an artist’s impression of the artificial cilia in action.

Friday May 27, 2022: Are stolen Cambodian statues hidden in the world’s great public collections?

We discuss Cambodia’s looted heritage with Celia Hatton, Asia Pacific editor and presenter at the BBC World Service, whose documentary for BBC TV and radio Cambodia: Returning the Gods exposes the connections between looters, smugglers and, allegedly, some of the world’s most famous encyclopaedic museums. Plus, the dark truth behind the art and antiques assembled by the Marcos family in the Philippines as they return to power.

We talk to the Filipino artist Pio Abad—who’s made art about Ferdinand and Imelda Marcos and their collections for more than a decade—about Bongbong Marcos’s presidential election victory in the Philippines and what that means for the country and the art and antiquities seized by its government after the Marcoses were deposed in the 1980s. And in this episode’s Work of the Week, we discuss a sculpture by Ruth Asawa—Untitled (S.266, Hanging Seven-Lobed, Multi-Layered Interlocking Continuous Form within a Form) (1961)—a highlight of a new exhibition at Modern Art Oxford in the UK, with Emma Ridgway, the show’s co-curator. Remarkably, the solo exhibition is the first in a European institution dedicated to the Japanese-American artist.

You can read Celia’s report on Cambodian antiquities online at bbc.co.uk. Cambodia: Returning the Gods (radio version) is on the BBC website and the BBC Sounds app—under The Documentary Podcast stream for the World Service and the Crossing Continents podcast stream in the UK—and on other podcast platforms.

The puzzle of Palaeospondylus – Over a hundred years ago, archaeologists discovered fossils of the aquatic animal Palaeospondylus. But since then researchers have been unable to place where this animal sits on the tree of life. Now, new analysis of Palaeospondylus’s anatomy might help to solve this mystery.

A strong, silk-based version of mother of pearl, and the parrots that use their heads when climbing.

Archaeologists have used LiDAR to uncover evidence of an ancient civilization buried in the Bolivian Amazon. The team’s work suggests that this area was not as sparsely populated in pre-Hispanic times as previously thought.

We discuss some highlights from the Nature Briefing. This time, the debate surrounding the first transplant of pig kidneys into humans, and the plants grown in lunar soil.