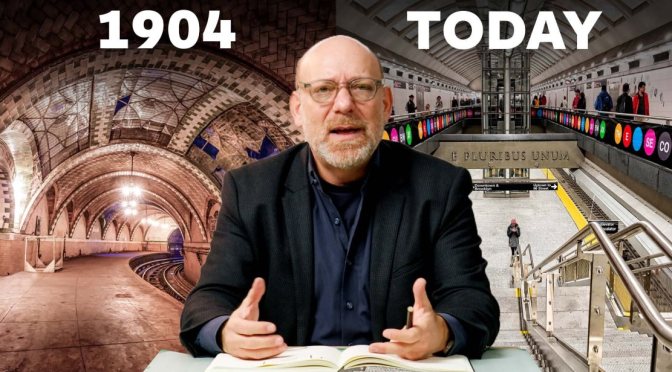 Victoria and Albert Museum (January 24, 2023) – Moulin Rouge! The Musical is a spectacle of romance and cabaret, set in the heart of Paris’ bohemian scene during the Belle Époque era. Bringing Baz Luhrmann’s landmark film to life on stage, the production is a musical mash-up extravaganza, immersing you in a world of splendour and glory.

Video timeline: 00:00 Catherine Zuber’s design process 0:29 What is Moulin Rouge! The Musical? 00:49 Was the Moulin Rouge real? 01:05 Adapting Baz Luhrmann’s film 01:23 Creating a costume for Satine – design sketches 02:17 Researching the history of showgirls 02:49 How does the costume work? 03:53 Designing costumes for theatre 04:12 Mounting and installing the costume in the Re:Imagining Musicals display

Join Costume Designer Catherine Zuber and Curator Harriet Reed as they take us behind the scenes, introducing the real Moulin Rouge and showgirls of the time, showing the original design sketches for Satine’s dazzling diamond studded costume, and demonstrating how one vital mechanism is crucial for the piece’s quick change on stage.

The costume is now in the V&A’s collection of Theatre and Performance and can be seen as part of the Re:Imagining Musicals display until November 2023.

Vienna is a city and  Bundesland (federal state), the capital of Austria. Of the country’s nine states, Vienna is the smallest in area but the largest in population.

Modern Vienna has undergone several historical incarnations. From 1558 to 1918 it was an imperial city—until 1806 the seat of the Holy Roman Empire and then the capital of the Austro-Hungarian Empire. In 1918 it became the capital of the truncated, landlocked central European country that emerged from World War I as a republic. From 1938 to 1945 Austria was a part of Adolf Hitler’s “Greater” Germany, and Vienna became “Greater” Vienna, reflecting the Nazi revision of the city limits.

In the decade following World War II, Austria was occupied by British, French, American, and Soviet forces, and Vienna was divided into five zones, including an international zone, covering the Innere Stadt (“Inner City”). In 1955 the State Treaty, by which the country regained independence, was signed with the four occupying powers, and Vienna became once again the capital of a sovereign Austria.

Filmed on January 22, 2023 by: Travel and Adventure Studios

January 24, 2023 – We report on the EU’s new sanctions against Iran. Plus: a look at South Africa’s worsening energy crisis and controversial plans to hold joint naval drills with Russia and China, the latest fashion news, and this year’s Oslo Design Fair.

Authorities Ask Why Gunman Attacked California Ballroom He Once Enjoyed

The authorities did not specify a motive in attack that killed 11, but investigators were focusing on the theory that the gunman was driven by personal grievances.

Officials are still releasing the names of the 11 people killed at a Los Angeles dance club.

In Moscow, a Quiet Antiwar Protest With Flowers and Plush Toys

Amid Russia’s crackdown on resistance to the war in Ukraine, some have dared to lay bouquets and other offerings at a statue of a Ukrainian poet, protesting the recent Russian strike on civilians in Dnipro.

Depleted Under Trump, a ‘Traumatized’ E.P.A. Struggles With Its Mission

Despite an injection of funding, the agency still has not recovered from an exodus of scientists and policy experts, both insiders and critics say.