A walking tour in Guarcino, region 𝗟𝗮𝘇𝗶𝗼, central Italy, province of Frosinone, a small town of about 1.500 inhabitants.

The origins of Guercino date back to the 8th century BC, when it was a settlement with the name of Vercenum of the Ernici, a pre-Roman Italic people, and strategic point in the valley of the Aniene river. Nowadays it is a favorite starting point for excursions into the limestone mountains, amid age old trees, spring waters and picturesque grottos.

Richard Wilbur’s translations of Molière, now in the Library of America, have a fluency that goes beyond meter and rhyme to encompass textures of speech and movements of thought.

The US’s history of moral evasiveness around wartime atrocities undermines the very institution that might eventually bring Putin and his subordinates to justice: the International Criminal Court. 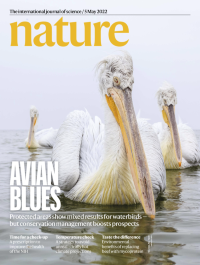 Conservation efforts for waterbirds, such as the Dalmatian pelicans (Pelecanus crispus) pictured on the cover, have centred on creating protected areas to maintain suitable habitats. But it has been unclear to what extent protected areas affect species’ population levels. In this week’s issue, Hannah Wauchope and her colleagues present an analysis that suggests protected areas have a mixed impact on waterbird populations. The researchers examined 1,506 protected areas to assess how they affected 27,055 waterbird populations across the globe. By assessing population levels before and after the implementation of protection, and comparing this change between protected and unprotected areas, the researchers identified the mixed impact, but also saw a strong indication that areas that were managed for waterbirds or their habitats were more likely to benefit populations. As a result, the team suggests that conservation strategies will require not only an increase in the number of protected areas, but active management of those areas to have the best chance of success.

This week, Philip Guston Now is unveiled at the Museum of Fine Arts in Boston after its controversial postponement in 2020; Ben Luke talks to Kate Nesin and Megan Bernard, two of the four curators on the team assembled by the museum to revise the exhibition, which was postponed by four museums in the wake of George Floyd’s murder.

We discuss how the show and its interpretation have changed in the last two years. As Queer Britain, the UK’s first national LGBTQ+ museum opens its doors, Gareth Harris, chief contributing editor at The Art Newspaper, speaks to Matthew Storey, the curator of the museum’s inaugural exhibition, Welcome to Queer Britain. And in this episode’s Work of the Week, our acting digital editor, Aimee Dawson, talks to Candida Lodovica de Angelis Corvi, global director at the Colnaghi gallery, about a rediscovered work by the 17th-century artist Caterina Angela Pierozzi, on display at Colnaghi in London.

The Bay of Kotor is the largest and most beautiful bay in the Adriatic Sea. The high rocky mountains preserve the atmosphere and history of these places. The coastal town of Perast was once part of the Republic of Venice, but now it is a colorful attraction in Montenegro.

Northern Ireland’s historic election. Plus: US senators push to scrap the filibuster rule, the latest transport news and an interview with Kateryna Yushchenko, the former first lady of Ukraine.