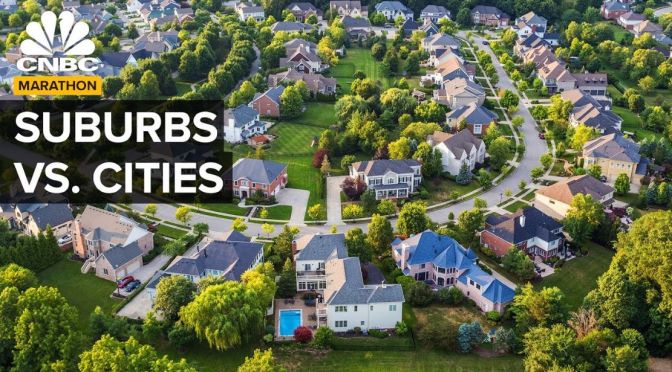 CNBC Marathon reviews why a cost-of-living crisis is unfolding across America’s housing infrastructure. CNBC explores what that means for apartments in the cities and houses in the suburbs. Inflation data shows that costs for items such as rent and groceries are increasing quickly across the Sun Belt and coastal cities.

Now years removed from the darkest days of the pandemic, people are asking: Is a return to the city worth it? Metropolitan regions have sprawled in recent years, raising budget concerns and quality-of-life issues for the people who remain downtown. Meanwhile the absence of commuters is slowing the recovery in leisure and hospitality. About 46% of renters in the U.S. are struggling to make ends meet, according to Harvard University researchers.

Builders say conditions for renters will get worse before they get better. A snarled supply chain, a labor shortage, and rising interest rates are worsening what some call a “throwaway” development pattern. Several real estate industry experts have ideas about how to make housing more attainable. Some of the most popular ideas include mixed-use districts and master-planned communities.

America’s suburbs are sprawling again. Over the 20th century, real estate developers built large tracts of single-family homes outside of major cities. The builders were following mortgage underwriting standards first introduced by the Federal Housing Administration in the 1930s. Over the century, those guidelines created housing market conditions that explicitly shut out many minorities. Experts say it is possible to update these old building codes to create equity while fixing some, but not all of the problems of American suburbia. CNBC Marathon brings together the best of CNBC’s coverage on the U.S. housing crisis and how life in the suburbs impacts city living. 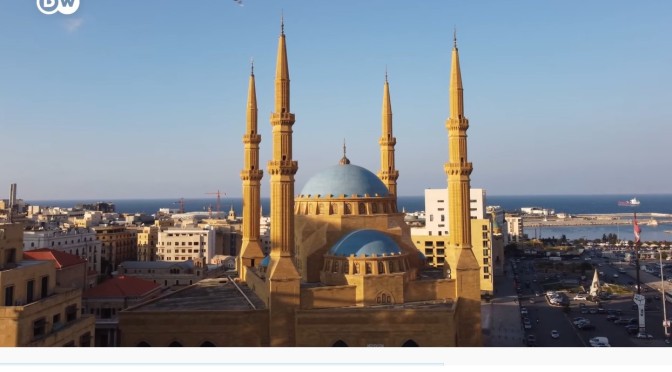 Lebanon is now going through the worst economic crisis in its history. 80 per cent of the population lives below the poverty line. In one year, food prices have jumped 500 per cent due to galloping inflation. Lebanon was long regarded as the Switzerland of the Middle East.

But those days are gone. A series of crises have plunged the nation into the abyss. And its people are suffering. For Riad, who runs a grocery store in the suburbs of Beirut, business has become hellish. Every morning, calculator in hand, he changes the labels of his products according to the day’s exchange rate. An operation made all the more complex by the fact that his store is plunged into darkness, due to a lack of electricity.

The Lebanese government no longer provides more than two hours of electricity per day in the country. It is impossible for the population to heat, light or use their refrigerators. Taking advantage of the situation, a network of private generators has emerged. The Lebanese pound, the local currency, has lost 90 per cent of its value.

The only people unaffected are those paid in dollars. The greenback, which can be exchanged for a small fortune against the local currency, has created a new privileged social class in the country. A salesman in an international pharmaceutical company, Joseph lives like a king in a ruined Lebanon. Thanks to his new purchasing power, he repaid his mortgage in two months, instead of… twenty years!

In a bankrupt state, plagued by corruption, six out of ten Lebanese now dream of leaving the country. In Tripoli, in northern Lebanon, Mohammed and his son set out for Germany by sea. Even though the trip was cut short off the Turkish coast, the young father is still ready to take all possible risks to reach the European Eldorado.

The Federal Reserve says it will accelerate the wind-down of its bond-buying program, the biggest step the central bank has taken in reversing its pandemic-era stimulus. Here’s how tapering works, and why it sends markets on edge. Photo illustration: Adele Morgan/WSJ 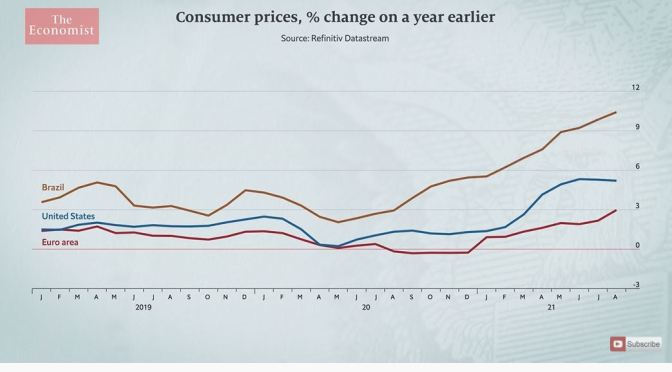 Inflation rates have been rising all over the world, surprising many economists. While the rich world is paying higher prices for durable goods such as cars, in emerging markets soaring food prices are a greater worry.

What is causing this unexpected bout of inflation, and will it last? 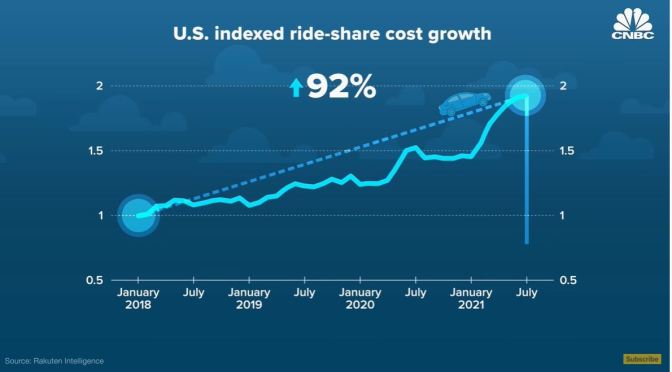 According to Rakuten Intelligence, the cost of a ride from a ride-sharing app like Uber or Lyft increased 92% between January of 2018 and July of 2021. Many riders have also noticed increased wait times for rides, and a recent driver shortage is likely to blame. In early July 2021, Uber and Lyft drivers were about 40% below capacity. The companies have taken notice of this driver shortage, and are investing millions worth of bonuses and base rates to convince drivers to return. But will it be enough to get drivers back on the roads?

A selection of three essential articles read aloud from the latest issue of The Economist. This week: China’s attack on tech, function in Washington (10:09), and our prediction model for Germany’s election (17:15)

A selection of three essential articles read aloud from the latest issue of The Economist. This week, the new fault lines in the world economy, the catastrophic consequences of America abandoning Afghanistan (10:28) and how Mills & Boon, a famed publisher of romantic novels, wants to diversify its hero base (17:30)

Mass unemployment, colossal bankruptcies, and a shattered tourism industry have ravaged New York City during the coronavirus pandemic. In January 2021, Governor Andrew Cuomo proposed raising taxes on the wealthy, while cutting Medicaid and school spending to balance the multi-billion dollar budget deficit. Opponents say tax hikes could lead to a mass exodus of the wealthy New Yorkers who fund a large portion of the city’s revenue. Others say that the crisis has exasperated existing inequalities and cutting social services will only hurt those most affected.