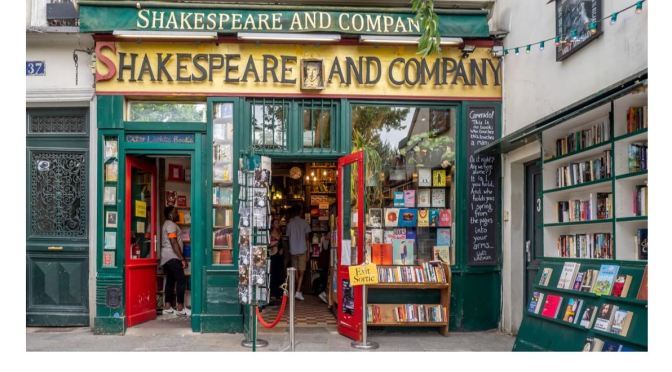 From the bestselling, award-winning author of Middle England comes a profoundly moving, brutally funny and brilliantly trueportrait of Britain told through four generations of one family

In Bournville, a placid suburb of Birmingham, sits a famous chocolate factory. For eleven-year-old Mary and her family in 1945, it’s the centre of the world. The reason their streets smell faintly of chocolate, the place where most of their friends and neighbours have worked for decades. Mary will go on to live through the Coronation and the World Cup final, royal weddings and royal funerals, Brexit and Covid-19. She’ll have children and grandchildren and great-grandchildren. Parts of the chocolate factory will be transformed into a theme park, as modern life and the city crowd in on their peaceful enclave.

Born in 1799, Cashel Greville Ross experiences myriad lives: joyous and devastating, years of luck and unexpected loss. Moving from County Cork to London, from Waterloo to Zanzibar, Cashel seeks his fortune across continents in war and in peace. He faces a terrible moral choice in a village in Sri Lanka as part of the East Indian Army. He enters the world of the Romantic Poets in Pisa. In Ravenna he meets a woman who will live in his heart for the rest of his days. As he travels the world as a soldier, a farmer, a felon, a writer, a father, a lover, he experiences all the vicissitudes of life and, through the accelerating turbulence of the nineteenth century, he discovers who he truly is. This is the romance of life itself, and the beating heart of The Romantic. 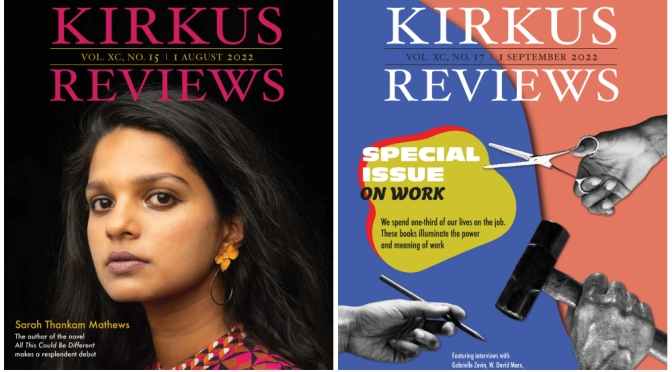 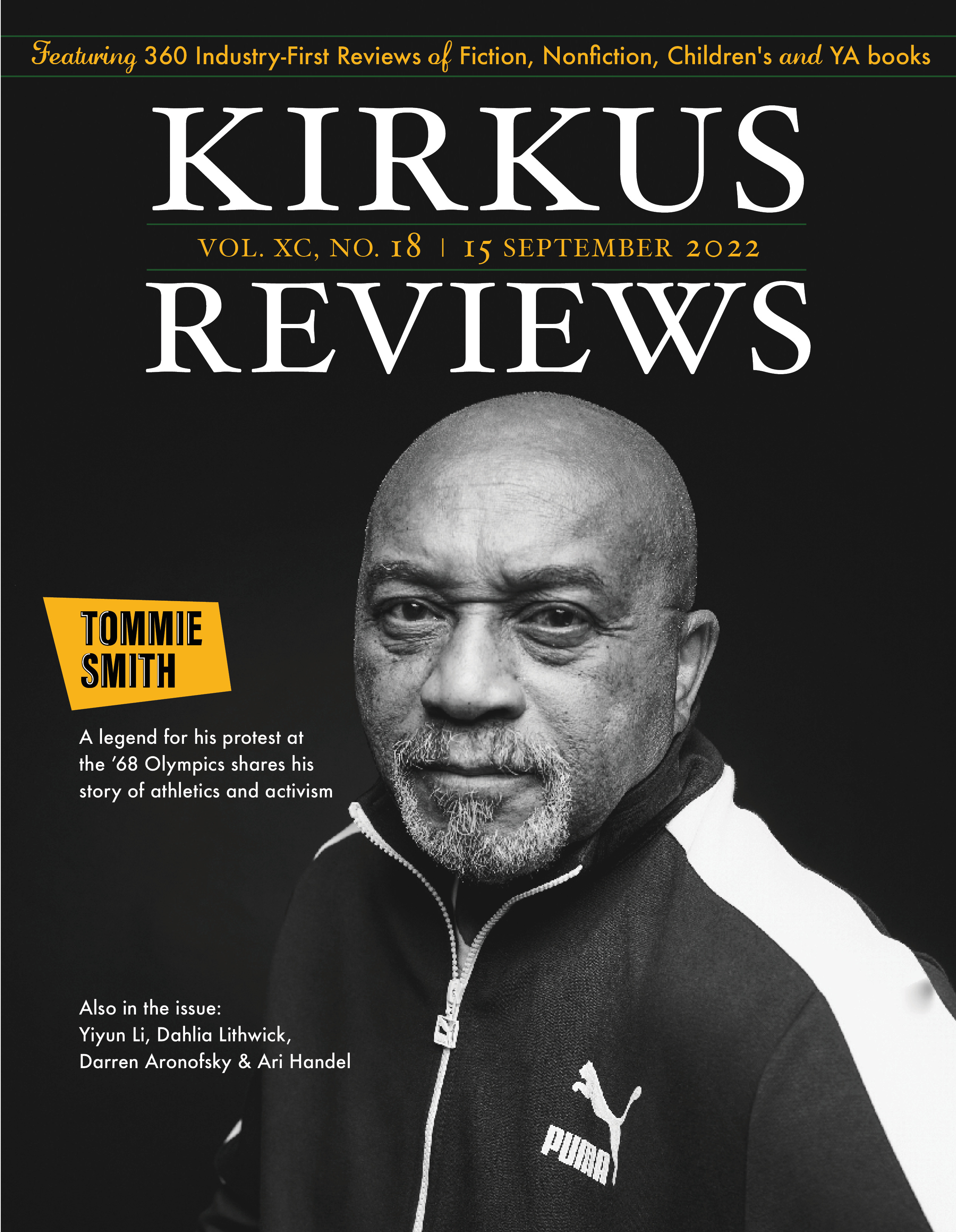 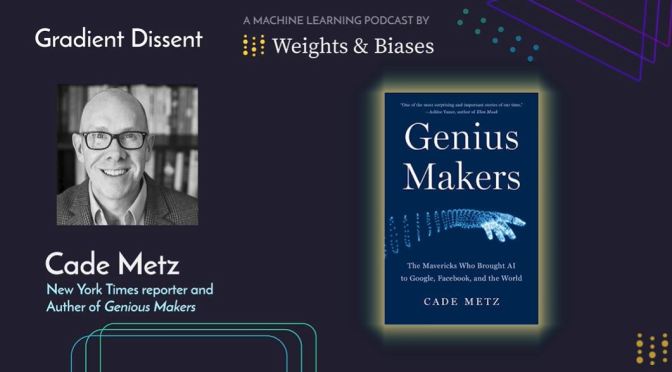 How Cade got access to the stories behind some of the biggest advancements in AI, and the dynamic playing out between leaders at companies like Google, Microsoft, and Facebook.

Cade Metz is a New York Times reporter covering artificial intelligence, driverless cars, robotics, virtual reality, and other emerging areas. Previously, he was a senior staff writer with Wired magazine and the U.S. editor of The Register, one of Britain’s leading science and technology news sites. His first book, “Genius Makers”, tells the stories of the pioneers behind AI. 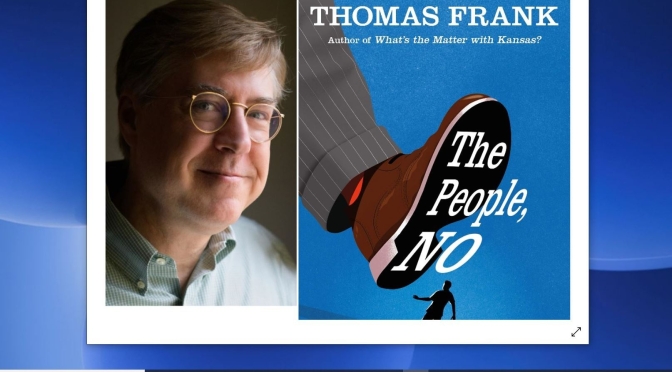 Lewis H. Lapham speaks with Thomas Frank, author of “The People, No”, an eye-opening account of populism, the most important―and misunderstood―movement of our time.

Rarely does a work of history contain startling implications for the present, but in The People, No Thomas Frank pulls off that explosive effect by showing us that everything we think we know about populism is wrong. Today “populism” is seen as a frightening thing, a term pundits use to describe the racist philosophy of Donald Trump and European extremists. But this is a mistake.

The real story of populism is an account of enlightenment and liberation; it is the story of American democracy itself, of its ever-widening promise of a decent life for all. Taking us from the tumultuous 1890s, when the radical left-wing Populist Party―the biggest mass movement in American history―fought Gilded Age plutocrats to the reformers’ great triumphs under Franklin Roosevelt and Harry Truman, Frank reminds us how much we owe to the populist ethos. Frank also shows that elitist groups have reliably detested populism, lashing out at working-class concerns. The anti-populist vituperations by the Washington centrists of today are only the latest expression.

Frank pummels the elites, revisits the movement’s provocative politics, and declares true populism to be the language of promise and optimism. The People, No is a ringing affirmation of a movement that, Frank shows us, is not the problem of our times, but the solution for what ails us. 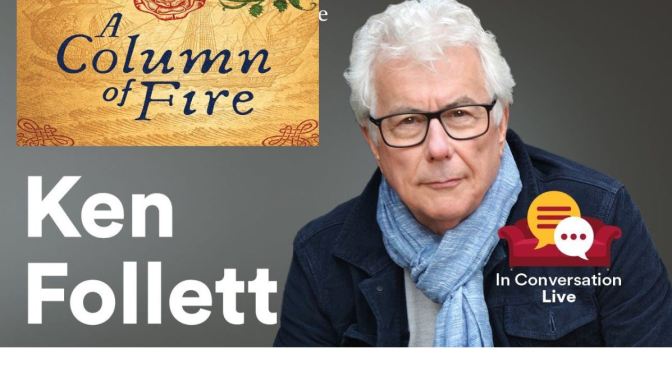 Ken Follett, international best-selling author and one of the world’s best-loved novelists, joined Reverend Hilary De Lyon (RSM Vice-President) for a lively discussion about his work, including the variety of different kinds of novels he has written, from the longevity and international success of his first novel Eye of the Needle and the later The Pillars of the Earth, to his latest book A Column of Fire; and what inspires him in the creative process of developing exciting plots in many different historical settings. The RSM’s In Conversation Live series offers the opportunity to get first-hand insights into the lives and thoughts of high profile individuals through an intimate, relaxed and entertaining setting, direct to your living room.

Kenneth Martin Follett, CBE, FRSL is a Welsh author of thrillers and historical novels who has sold more than 160 million copies of his works. Many of his books have achieved high ranking on best seller lists. 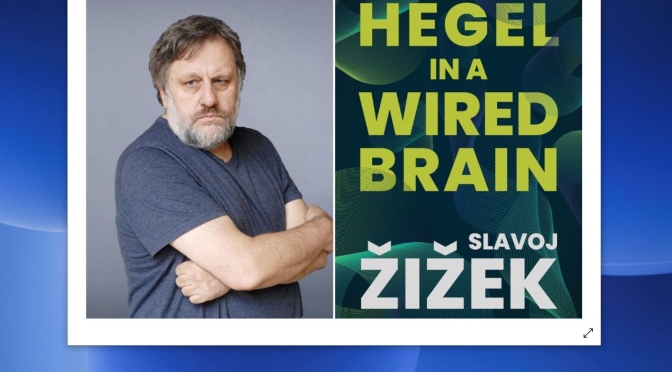 Slavoj Žižek is a Slovenian philosopher and writer whose vast catalogue of work has earned him celebrity status across the globe. A radical leftist, his work encompasses everything from psychoanalysis and political theory to art and film criticism.

Described as “the leading Hegelian of our time”, he speaks to Georgina Godwin about his latest book, ‘Hegel in a Wired Brain’, which is an evaluation of the German philosopher’s relevance in the 21st century that ties in with the 250th anniversary of his birth.

In celebration of the 250th anniversary of the birth of G.W.F. Hegel, Slavoj Žižek gives us a reading of the philosophical giant that changes our way of thinking about our new posthuman era. No ordinary study of Hegel, Hegel in a Wired Brain investigates what he might have had to say about the idea of the ‘wired brain’ – what happens when a direct link between our mental processes and a digital machine emerges. Žižek explores the phenomenon of a wired brain effect, and what might happen when we can share our thoughts directly with others. He hones in on the key question of how it shapes our experience and status as ‘free’ individuals and asks what it means to be human when a machine can read our minds.

With characteristic verve and enjoyment of the unexpected, Žižek connects Hegel to the world we live in now, shows why he is much more fun than anyone gives him credit for, and why the 21st century might just be Hegelian. 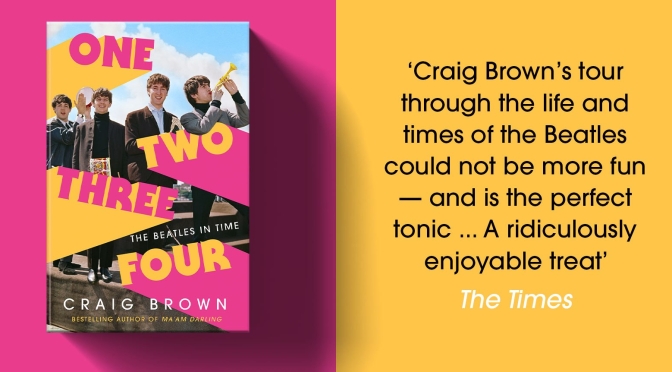 Robert Bound speaks to writer Craig Brown about his new biography of the Beatles, called ‘One Two Three Four: The Beatles in Time’. How do you say something fresh about one of the most written-about bands in history?

From the award-winning author of Ma’am Darling: 99 Glimpses of Princess Margaret comes a fascinating, hilarious, kaleidoscopic biography of the Fab Four.

John Updike compared them to ‘the sun coming out on an Easter morning’. Bob Dylan introduced them to drugs. The Duchess of Windsor adored them. Noel Coward despised them. JRR Tolkien snubbed them. The Rolling Stones copied them. Loenard Bernstein admired them. Muhammad Ali called them ‘little sissies’. Successive Prime Ministers sucked up to them. No one has remained unaffected by the music of The Beatles. As Queen Elizabeth II observed on her golden wedding anniversary, ‘Think what we would have missed if we had never heard The Beatles.’

One Two Three Four traces the chance fusion of the four key elements that made up The Beatles: fire (John), water (Paul), air (George) and earth (Ringo). It also tells the bizarre and often unfortunate tales of the disparate and colourful people within their orbit, among them Fred Lennon, Yoko Ono, the Maharishi, Aunt Mimi, Helen Shapiro, the con artist Magic Alex, Phil Spector, their psychedelic dentist John Riley and their failed nemesis, Det Sgt Norman Pilcher. 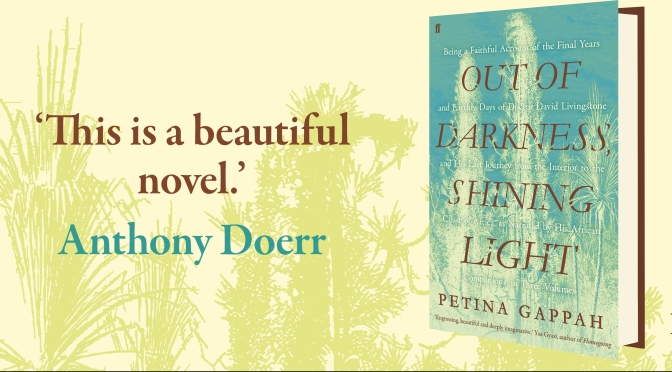 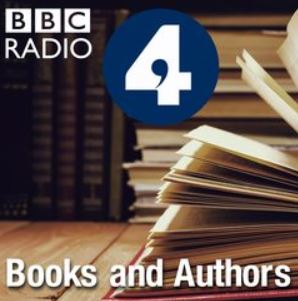 BBC Radio 4 speaks to Petina Gappah on her new book, “Out of Darkness, Shining Light”.

“This is how we carried out of Africa the poor broken body of Bwana Daudi, the Doctor, David Livingstone, so that he could be borne across the sea and buried in his own land.”

So begins Petina Gappah’s powerful novel of exploration and adventure in nineteenth-century Africa—the captivating story of the loyal men and women who carried explorer and missionary Dr. Livingstone’s body, his papers and maps, fifteen hundred miles across the continent of Africa, so his remains could be returned home to England and his work preserved there.

Narrated by Halima, the doctor’s sharp-tongued cook, and Jacob Wainwright, a rigidly pious freed slave, this is a story that encompasses all of the hypocrisy of slavery and colonization—the hypocrisy at the core of the human heart—while celebrating resilience, loyalty, and love. 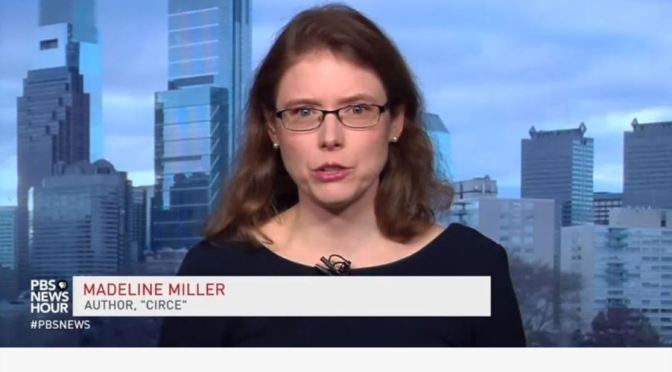 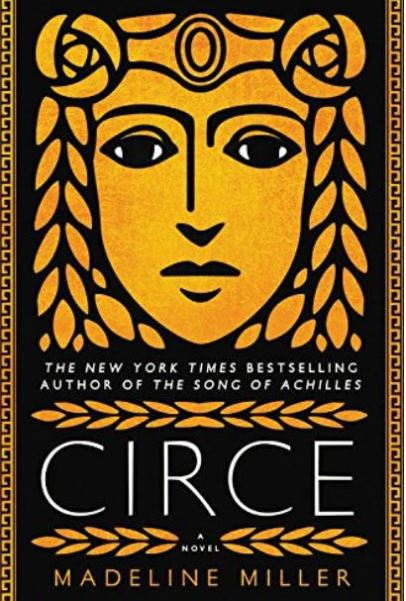 In the house of Helios, god of the sun and mightiest of the Titans, a daughter is born. But Circe is a strange child–not powerful, like her father, nor viciously alluring like her mother. Turning to the world of mortals for companionship, she discovers that she does possess power–the power of witchcraft, which can transform rivals into monsters and menace the gods themselves.
Threatened, Zeus banishes her to a deserted island, where she hones her occult craft, tames wild beasts and crosses paths with many of the most famous figures in all of mythology, including the Minotaur, Daedalus and his doomed son Icarus, the murderous Medea, and, of course, wily Odysseus.

But there is danger, too, for a woman who stands alone, and Circe unwittingly draws the wrath of both men and gods, ultimately finding herself pitted against one of the most terrifying and vengeful of the Olympians. To protect what she loves most, Circe must summon all her strength and choose, once and for all, whether she belongs with the gods she is born from, or the mortals she has come to love.

With unforgettably vivid characters, mesmerizing language and page-turning suspense, Circe is a triumph of storytelling, an intoxicating epic of family rivalry, palace intrigue, love and loss, as well as a celebration of indomitable female strength in a man’s world.