Trumpism and the American philosophical tradition

Twenty-five years ago, the philosopher Richard Rorty accomplished something many writers aspire to but few ever pull off: he predicted the future. Toward the end of his 1998 book Achieving Our Country, Rorty considered the possibility that “the old industrialized democracies are heading into a Weimar-like period, one in which populist movements are likely to overturn constitutional governments.”

A solar land rush in the West

A solar farm in the Mojave Desert. All photographs from Nevada by Balazs Gardi, October and November 2022, for Harper’s Magazine

Harper’s Magazine, December 2022 – Should we be Rooting for the Apocalypse? Rachel Kushner on Timothée Chalamet’s Cannibal Turn Sasha Frere-Jones Searches for Perfect Sound A Christmas Story by Kate DiCamillo And More.

The sense of an ending

You Talkin’ to Me?

A Forest of Berlin

This Is Not Justice

A Philadelphia teenager and the empty promise of the Sixth Amendment

The Improbable Rise and Savage Fall of Siegfried & Roy

At the peak of their fame, they were arguably the most famous magicians since Houdini.

A museum curator was forced out of her job over allegations of racism that an investigation deemed unfounded. What did her defenestration accomplish?

The only just future for my home is not statehood, but full independence from the United States. 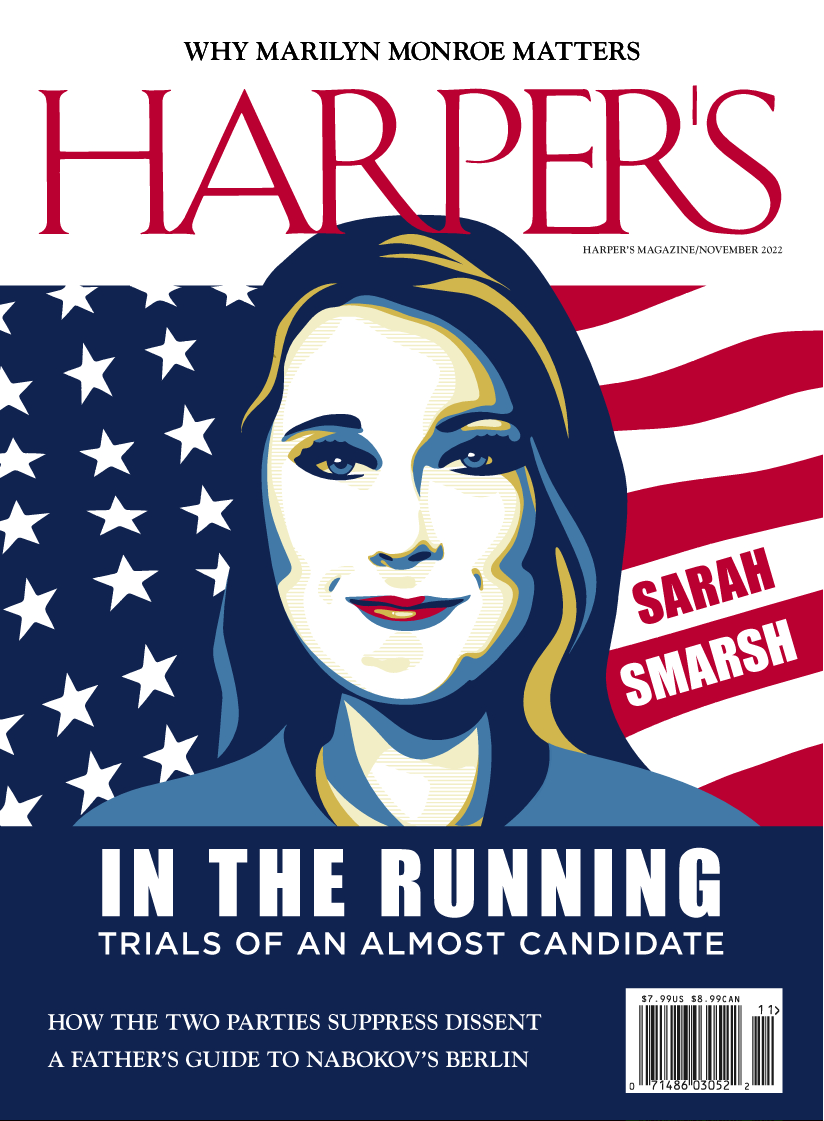 The trials of an almost candidate – In January 2019, when I found myself sitting across from Mindy Myers in a cramped D.C. coffee shop, the new resistance was riding high. A diverse lot of Democrats had just taken control of the House of Representatives, positioning themselves to curtail Donald Trump’s devastating abuse of the presidency…

Notes from the Marilyn Appreciation Society

What comes after the American Century?

In February 1941, as Adolf Hitler’s armies prepared to invade the Soviet Union, the Republican oligarch and publisher Henry Luce laid out a vision for global domination in an article titled the american century. World War II, he argued, was the result of the United States’ immature refusal to accept the mantle of world leadership after the British Empire had begun to deteriorate in the wake of World War I. American foolishness, the millionaire claimed, had provided space for Nazi Germany’s rise. The only way to rectify this mistake and prevent future conflict was for the United…

“Roughly two and a half years into the pandemic, White House officials and health experts have reached a pivotal conclusion about Covid-19 vaccines: The current approach of offering booster shots every few months isn’t sustainable.

Though most vaccines take years to develop, the Covid shots now in use were created in record time—in a matter of months. For health authorities and a public desperate for tools to deal with the pandemic, their speedy arrival provided a huge lift, preventing hospitalizations and deaths while helping people to escape lockdowns and return to work, school and many other aspects of pre-Covid life.”

An ethereal meditation on longing, loss, and time, sweeping from the highways of Texas to the canals of Mars–by the acclaimed essayist and author of Shame and Wonder

David Searcy’s writing is enchanting and peculiar, obsessed with plumbing the mysteries and wonders of our everyday world, the beauty and cruelty of time, and nothing less than what he calls “the whole idea of meaning.” In The Tiny Bee That Hovers at the Center of the World, he leads the reader across the landscapes of his extraordinary mind, moving from the decaying architectural wonder that is the town of Arcosanti, Arizona, to driving the vast, open Texas highway in his much-abused college VW Beetle, to the mysterious, canal-riddled Martian landscape that famed astronomer Percival Lowell first set eyes on, via his telescope, in 1894. Searcy does not come at his ideas directly, but rather digresses and meditates and analyzes until some essential truth has been illuminated–and it is in that journey that the beauty is found.

Read an essay by David Searcy

He identifies a cluster of non-medical drivers of deadly outbreaks—war, political instability, human migration, poverty, urbanization, anti-science and nationalist sentiment, and climate change—and maintains that advances in biomedicine must be accompanied by concerted action on these geopolitical matters.

War and Pestilence ride together as two of the Four Horsemen of the Apocalypse, and there is no shortage of historical precedent to demonstrate the aptness of the allegory. The great influenza pandemic that began in 1918 was propelled, in part, by troop movements and population shifts at the end of the First World War. Both the First and the Second World Wars produced typhus epidemics. Armed conflicts cause malnutrition, poor pest control, and sanitation problems; even the soil often becomes contaminated. Medical facilities are destroyed; doctors and nurses, diverted to combat duty, are unable to provide care, and vaccination and other mass-treatment programs usually falter.

Each issue of Liberties, the Foundation’s decidedly analog quarterly publication, will feature a combination of essays from prominent writers and introduce new talent. Contributors already signed include leading voices from this country and abroad in the worlds of culture, business, entertainment, government, politics, and technology. Each edition of Liberties will also publish new poetry from both highly awarded and up-and-coming poets.

To advance independent thinking and propel new ideas, well-known figures from the worlds of arts, business, government, higher education and philanthropy today announced the formation of the Liberties Journal Foundation. Based in Washington, D.C., the Foundation is a non-partisan, not-for-profit organization that seeks to inform today’s cultural and political leaders, deepen the understanding of citizens, and inspire the next generation to participate in the democratic process and public service. The Foundation’s first initiative is a new quarterly journal, Liberties – A Journal of Culture and Politics, slated for October 2020 debut.

A book for the coat pocket, Liberties’ diverse voices celebrate one commonality: freedom of inquiry and thought.

Liberties’ editorial team reflects the mission of the Journal pairing acclaimed literary critic Leon Wieseltier as editor with Celeste Marcus, a new talent, as managing editor. Bill Reichblum is the publisher. The book will be available as a soft-cover edition, by subscription or single copy, in bookstores and online.

“The Foundation exists to meet the thirst in our country for ideas and serious thinking at a time when the daily news dominates the media and overwhelms our lives,” says Moses. “The Foundation will provide an outlet for world-renowned writers on culture and politics to reach a readership that is looking for stimulation and inspiration at a time when our lives are increasingly assailed by ephemeral trivia.”

“We believe there is a genuine need to take time to listen, to actively absorb in-depth thinking of both those with accomplished experience and the inventive new generation at the beginning of their careers,” says Reichblum. “Their creativity, insights, and perceptions can individually and collectively inspire culture and impact politics.”

Scott discusses his first in a series of essays about American writers, Wallace Stegner, and David Kamp talks about “Sunny Days: The Children’s Television Revolution That Changed America.”