Scientific American – Inside the December 2022 issue:

How JWST Is Changing Our View of the Universe

The James Webb Space Telescope’s first images of the distant universe shocked astronomers. Is the discovery of unimaginably distant galaxies a mirage or a revolution?

How Taking Pictures of ‘Nothing’ Changed Astronomy

The first images from the James Webb Space telescope have been revealed. Incredibly clear images of the Carina Nebula, the Eight-Burst Nebula, a galaxy cluster called Stephan’s Quintet and an exoplanet named WASP-96b make up the first set of science data from JWST.

Dark matter makes up most of the matter in the Universe, and is thought to be needed for galaxies to form. But four years ago, astronomers made a perplexing, and controversial discovery: two galaxies seemingly devoid of dark matter.

This week the team suggests that a cosmic collision may explain how these, and a string of other dark-matter-free galaxies, could have formed.

How fossil fuel burning has caused levels of helium to rise, and a high-efficiency, hybrid solar-energy system.

Research Highlight: Helium levels in the atmosphere are ballooning

10:49 Researchers experiences of the war in Ukraine

We hear the stories of scientists whose lives have been affected by Russia’s invasion of Ukraine, including researchers who have become refugees, soldiers and activists in the face of a horrifying conflict.

20:46 Imaging the black hole at the centre of the Milky Way

Last week, a team of researchers released an image of Sagittarius A*, the supermassive blackhole at the centre of our galaxy. We hear how they took the image and what it is revealing about these enormous objects.

Nature News: Black hole at the centre of our Galaxy imaged for the first time

The Hubble Space Telescope celebrated its 32nd year in orbit by premiering a stunning new Hubble image of a collection of five galaxies, known as Hickson Compact Group 40. Even after all these years, Hubble continues to uncover the mysteries of the universe. These are a few science achievements from Hubble’s latest year in orbit.

For biologists, a long-standing question has been why some animals live longer than others. This week a team have attempted to answer this, by measuring the rates that different animal species accumulate mutations. They show that longer-lived animals acquire mutations at a slower rate, which helps to explain why cancer risk does not scale with lifespan.

A clinical trial suggests a change to the treatment of a pregnancy ailment, and astronomers identify the largest known structure produced by a single galaxy.

Research Highlight: Ambitious trial inspires a rethink on a common ailment of pregnancy

Research Highlight: Even among ‘giant’ galaxies this one is record-setting

10:43 The war in Ukraine’s effects on global energy

Many European countries are dependent on Russian fossil fuels for energy production. Following Russia’s unprovoked invasion of Ukraine, these countries are looking to wean themselves off these fuels, which could have short- and long-term impacts on emissions and food production.

Feature: What the war in Ukraine means for energy, climate and food

Editorial: The EU can simultaneously end dependence on Russia and meet climate goals

Editorial: The war in Ukraine is exposing gaps in the world’s food-systems research

19:58 A new measurement of a particle’s mass hints at new physics

Last week, a new estimate of the W boson’s mass caused much excitement among physicists. The result suggests that this particle is heavier than theory predicts, a finding that could be the first major breach in the standard model of particle physics. However, measuring W bosons is notoriously tricky, and further work will be needed to confirm the finding. 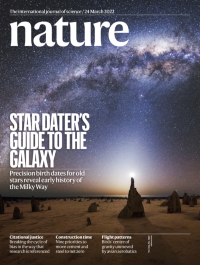 Star dater’s guide to the Galaxy

The cover image shows a view of the Milky Way captured at Nambung National Park in Western Australia. To understand how the Galaxy formed requires precision age dating of the stars that it contains. In this week’s issue, Maosheng Xiang and Hans-Walter Rix of the Max Planck Institute for Astronomy in Heidelberg, Germany, present an analysis of the birth dates for nearly 250,000 stars in their subgiant evolutionary phase, when they can serve as precise stellar clocks. The researchers found that the individual ages of the stars ranged from about 1.5 billion to more than 13 billion years old. Tripling the age-dating precision for such a large stellar sample allowed the researchers to infer the sequence of events that initiated our Galaxy’s formation. Using this information, Xiang and Rix were able to determine that the oldest part of our Galaxy’s disk had already begun to form about 13 billion years ago, just 800 million years after the Big Bang, and that the formation of the inner Galactic halo was completed some 2 billion years later.

The James Webb Space Telescope, a collaboration between NASA, the European Space Agency and the Canadian Space Agency, is set to launch later this month. Scientists say its technology makes it 100 times more powerful than the Hubble and could give it the ability to see back to the first galaxies in the universe. Illustration: Adele Morgan/WSJ

Out in the vast universe, unknown billions of strange worlds drift around other stars. Many of them are quite unlike anything in our solar system. While astronomers hope to use immense upcoming observatories to get a better look at their outsides, Federica Coppari has been using the world’s largest laser to investigate their insides. Coppari compresses familiar substances, including rocks and water, into new forms. Her work has yielded insights into the inner workings of frozen giants such as Uranus and Neptune, as well as the potential habitability of super-Earths — rocky planets that dwarf our own. Read more at Quanta Magazine: https://www.quantamagazine.org/federi…

To get started on your black hole hunt, first watch this handy video to learn the basics about these strange cosmic objects.