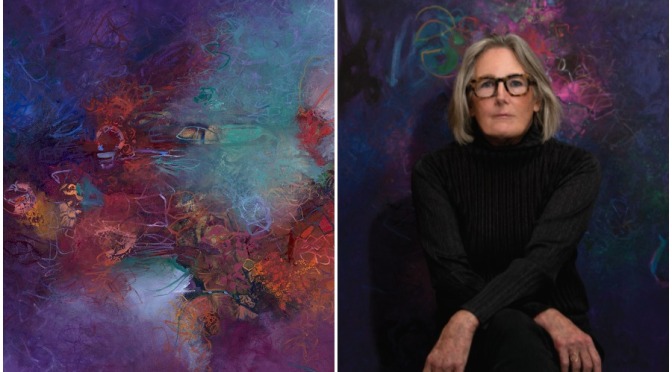 “I draw literally and figuratively from the natural world. My drawing and mark making refer to and derive from botanical and biological anatomies, including marine life, as well as, the structures of both macro and micro cosmologies and writing systems, such as logograms.”

Sigrid Burton is an American painter, long based in New York City, whose semi-abstract work is known for its use of expressive, atmospheric color fields and enigmatic allusions to natural and cultural realms. Burton has had solo exhibitions in New York City, Los Angeles, San Francisco, Chicago and Osaka, including at Artists Space and the Michael C. Rockefeller Arts Center, and been included in shows at A.I.R. Gallery, the John and Mable Ringling Museum of Art, and the Carnegie Art Museum, Oxnard. Her work belongs to the public collections of the Metropolitan Museum of Art, Rockefeller Foundation, and Palm Springs Desert Museum, and has been reviewed in Arts Magazine, Arts & Antiques, Jung Journal, Chicago Tribune and LA Weekly.

Writers most frequently observe that Burton’s atmospheric works recall artists such as J.M.W. Turner, Odilon Redon, Pierre Bonnard and Mark Rothko, as well as the light of her native California. Art & Antiques described her approach as “chromatic expressionism” in which color is “her undisputed protagonist”.  Peter Frank observed, “The dialectic between color and form has always inflected, even impelled” Burton’s painting, with color the more omnipresent element, and form the more persistent. Art historian William C. Agee wrote, “The domains she explores […] meet, intersect, fuse, and then disappear, like apparitions, in liquid pools of mist and color. Her pictorial odyssey refers simultaneously to both a higher order, a timeless cosmic vastness, as well as to a private, interior world, abounding in personal histories and memories.” Burton has lived and worked in Pasadena, California since 2013.