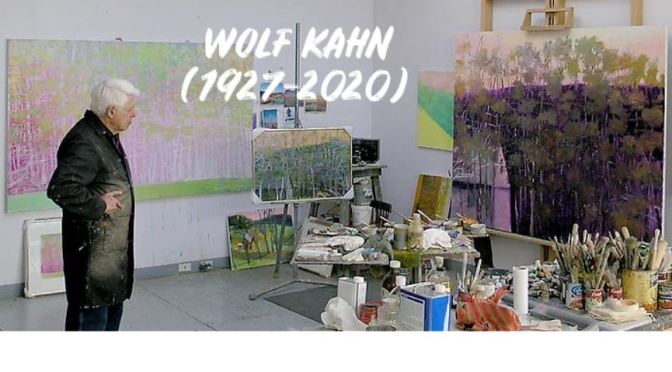 “I have a good relation with black,” says Wolf Kahn. This is not obvious. The painter stands in front of an unfinished oil—a pattern of trees, a slice of sky—and nothing of it argues “black”; we are in the realm of Gerard Manley Hopkins’s “skies of couple-colour” and “rose moles all in stipple.” The world here evoked is luminous, bright, and the act of witness is an act of celebration. Colors laid down on the canvas are some of Kahn’s signature colors: purple, alizarin crimson, lemon yellow, phthalo green.

The painter’s shock of hair is white, his eyes are a bright blue. Trim yet sturdy, eighty-five, he wears faded blue jeans and an old plaid shirt “I like the bottom left of this painting,” he says, “the bottom right needs work. But nature in general is quite generous in providing material for one’s imagination; I will return to it later, when you go.”

Seven years later and after his death, a black-rimmed condolence card seems no more appropriate now than then. An exuberant artist, this master of shape and color always had “a good relation with black.” So I, along with legions, mourn him—but I also want to celebrate his life-long act of witness and (to borrow a phrase applied to a predecessor) flat-out “Lust for Life.”

Wolf Kahn was a German-born American painter. Kahn, known for his combination of Realism and Color Field, worked in pastel, oil paint, and printmaking. He studied under Hans Hofmann, and also graduated from the University of Chicago.