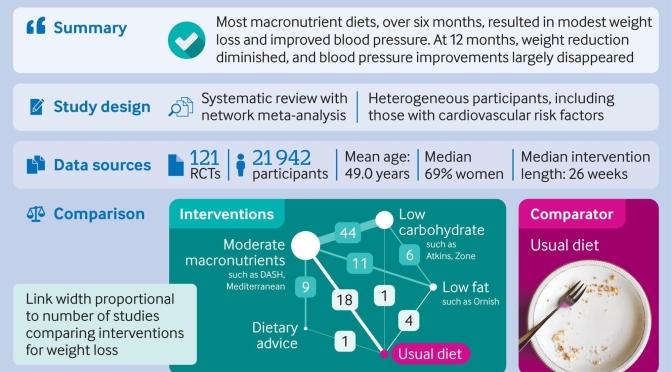 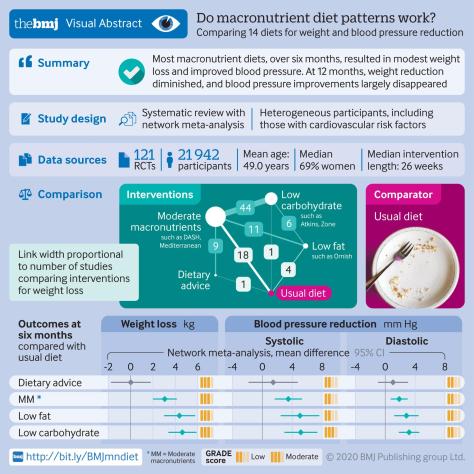 Compared with usual diet, moderate certainty evidence supports modest weight loss and substantial reductions in systolic and diastolic blood pressure for low carbohydrate (eg, Atkins, Zone), low fat (eg, Ornish), and moderate macronutrient (eg, DASH, Mediterranean) diets at six but not 12 months. Differences between diets are, however, generally trivial to small, implying that people can choose the diet they prefer from among many of the available diets (fig 6) without concern about the magnitude of benefits.

The worldwide prevalence of obesity nearly tripled between 1975 and 2018.1 In response, authorities have made dietary recommendations for weight management and cardiovascular risk reduction.23 Diet programmes—some focusing on carbohydrate reduction and others on fat reduction—have been promoted widely by the media and have generated intense debates about their relative merit. Millions of people are trying to lose weight by changing their diet. Thus establishing the effect of dietary macronutrient patterns (carbohydrate reduction v fat reduction v moderate macronutrients) and popular named dietary programmes is important.

Biological and physiological mechanisms have been proposed to explain why some dietary macronutrient patterns and popular dietary programmes should be better than others. A previous network meta-analysis, however, suggested that differences in weight loss between dietary patterns and individual popular named dietary programmes are small and unlikely to be important.4 No systematic review and network meta-analysis has examined the comparative effectiveness of popular dietary programmes for reducing risk factors for cardiovascular disease, an area of continuing controversy.