We explore Germany’s coalition deal and discuss the challenges ahead for the country’s next chancellor, Olaf Scholz. Plus: the significance of an election in Honduras for relations between China and Taiwan, and this year’s Grammy awards.

Foxconn, the Taiwanese company known for assembling Apple products, has unveiled three electric-vehicle prototypes. WSJ’s Stephanie Yang attended the launch event to see how the company is diversifying its business to gain a foothold in the auto industry. Photo: I-Hwa Cheng/Bloomberg News

We examine the worsening relations between Taipei and Beijing after Chinese and US diplomats gather to discuss the issue in Switzerland.

Plus, we ask whether sanctions are fit for purpose and tuck into the World’s 50 Best Restaurants list.

Taipei, the capital of Taiwan, is a modern metropolis with Japanese colonial lanes, busy shopping streets and contemporary buildings. The skyline is crowned by the 509m-tall, bamboo-shaped Taipei 101 skyscraper, with upscale shops at the base and a rapid elevator to an observatory near the top. Taipei is also known for its lively street-food scene and many night markets, including expansive Shilin market.

A look ahead to Ukrainian president Volodymyr Zelensky’s visit to the White House. Plus, Taiwan’s launch of an English-language news channel, and the laboratory working to ensure that Swiss trains run without a hitch. 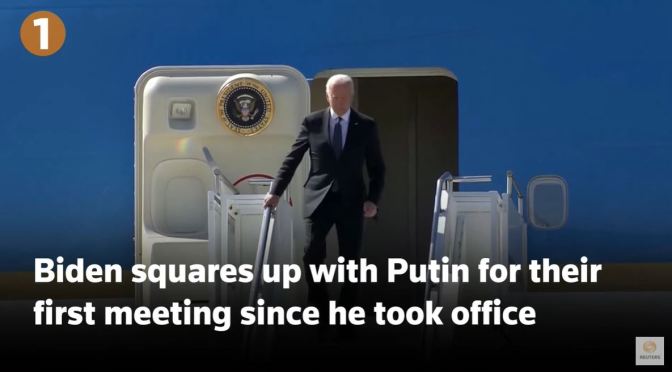 1. U.S. President Joe Biden meets Russian President Vladimir Putin in Geneva for their first face to face since he took office. Disagreements remain between the U.S. and Russia. Expectations for any breakthroughs are low.

2. Israeli airstrikes hit Gaza after Hamas launched fire balloons at Israel earlier in the day, which sparked fires. Tensions are high after an Israeli nationalist march in Jerusalem

3. The U.S. Senate voted to establish Juneteenth as a federal holiday.

4. Taiwan reported a record incursion of Chinese aircraft after the G7 scolded Beijing and called for peace in the Taiwan Strait.

5. Fireworks lit up New York state as COVID-19 restrictions were lifted. NY reported that 70% of adults have received at least one vaccine dose.

Taiwan has long been a U.S.-China flashpoint, but its tech and military capabilities have come into sharper focus under the Biden administration. WSJ travels to three places on the island to explain how both superpowers could determine Taiwan’s future. Photo: Wally Santana/AP

1. President Joe Biden threw his support behind waiving intellectual property rights for COVID-19 vaccines, bowing to mounting pressure from Democratic lawmakers and more than 100 other countries, but angering pharmaceutical companies.

2. A federal judge threw out the U.S. Centers for Disease Control and Prevention’s nationwide moratorium on evictions but agreed to put a temporary hold on her ruling as the government seeks to reverse the decision on appeal.

3. Representative Liz Cheney warned that her Republican Party is “at a turning point” as it prepares to try to remove her from leadership for rejecting former President Donald Trump’s false claims the election was stolen from him.

4. China condemned a joint statement by G7 foreign ministers that expressed support for Chinese-claimed Taiwan and cast Beijing as a bully, saying it was a gross interference in China’s internal affairs.

5. Hopes that India’s deadly second wave of COVID-19 was about to peak were swept away as it posted record daily infections and deaths and as the virus spread from cities to villages.

A selection of three essential articles read aloud from the latest issue of The Economist. This week, Taiwan: the most dangerous place on earth, post-covid syndrome (09:00) and Buttonwood: private-credit markets (28:55)