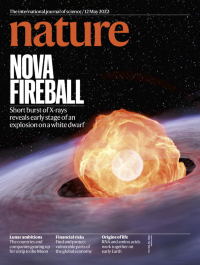 Nova explosions occur when a runaway thermonuclear reaction is triggered in a white dwarf that is accreting hydrogen from a companion star. The massive amount of energy released ultimately creates the bright light source that can be seen with a naked eye as a nova. But some of the energy has been predicted to be lost during the initial stages of the reaction as a flash of intense luminosity — a fireball phase — detectable as low-energy X-rays. In this week’s issue, Ole König and his colleagues present observations that corroborate this prediction. Using scans taken by the instrument eROSITA, the researchers identified a short, bright X-ray flash from the nova YZ Reticuli a few hours before it became visible in the optical spectrum. The cover shows an artist’s impression of the nova in the fireball phase.