Santo Stefano di Sessanio is a comune and hill town in the province of L’Aquila in the Abruzzo region of southern Italy. Located in the Gran Sasso e Monti della Laga National Park, in the highest region of the Apennines, this medieval hill town sits adjacent to the high plain of Campo Imperatore. 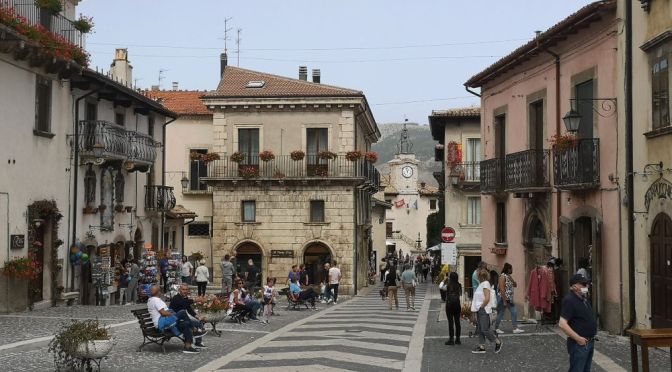 Pescocostanzo is a comune and town in the Province of L’Aquila in the Abruzzo region of Italy. It is a tourist destination, attracting people from all over Italy due to its landscape and environment. In winter, Pescocostanzo is a destination for skiers and snowboarders.

Pacentro is a comune of 1,279 inhabitants of the province of L’Aquila in Abruzzo, Italy. It is a well-preserved historic medieval village located in central Italy, several kilometers from the City of Sulmona about 170 kilometres east of Rome. Pacentro has been nominated as one of the “Borghi più belli d’Italia”.

Caramanico Terme is a comune and town in the province of Pescara in the Abruzzo region of Italy, situated near the confluence of the Orfento and Orta rivers, on a hilltop between the Monte Morrone and the Majella mountains.

Villalago, located 25 km south of Sulmona, in the Abruzzo region of L’Aquila, arose in the 11th century for Christian and Benedictine inspiration, finding in San Domenico Abate the founder of the monastery of San Pietro il Lago, in the upper Sagittario valley. At its foundation the monastery was endowed by the Lords of those lands, the counts of Valva, with goods and privileges and attracted settlers from all over, who settled, under the monks, in several villas in the Valle de Lacu, so called for the its five lakes. Over time, to ensure a valid defense, they perched on Mount Argoneta, where some Lombard towers already stood, and the new village took the name of Villalago. In 1479 the monastery was abandoned by the Benedictines and the Villalaghesi “no longer colonists, they became a body of the University, with independent possessions” (Antinori, chorography of Villalago). And under the motto of “Universitas contra omnes”, they fought victoriously against the Belprato Counts of Antwerp and against others who aimed to take over the entire Valle de Lacu.

The ‘Albergo Diffuso’ is a concept of hospitality that was launched in Italy as an attempt to revive small, historic villages at risk of abandonment and historic buildings at risk of crumbling.

A number of separate buildings make up an albergo diffuso, with a central unit corresponding to the reception within a 200-meter distance. They may feature rooms and apartments, with or without kitchen. There is also often a space for dining, and there may be other services and amenities as well, such as a pool.

Santo Stefano di Sessanio is a fortified medieval village built in the mountains of Abruzzo at over 1250 meters above sea level, within the Gran Sasso and Monti della Laga National Park.

The current urban configuration of the village was established in the middle of the Middle Ages when the phenomenon of fortification developed: high-altitude settlements, surrounded by a fortified wall perimeter that still remain today one of the most characteristic historical-topographical elements of the imaginary of the Italian landscape The integrity between territory and historical buildings has been residually preserved in some villages set in the Apennine mountains precisely because of their depopulation, in the more general context of impoverishment of the south, abandonment of the mountain and emigration of its people.

Filmed and Edited by: Giovanni Lattanzi

Spiritus Silvam, the spirit of the forest. A timelapse video for an enchanted journey in the Abruzzo forests, in search of the magical spirit. That vital essence that inhabits all the woods of the world and that welcomes and accompanies you when you are among the trees, in their home. But you must have a free and aware mind, as well as a pure soul, to be able to meet him. And you have to remain silent in thought and open in your heart to talk to us and let you tell his magical stories.

Abruzzo is an Italian region, east of Rome, with an Adriatic coastline and the Apennine Mountains. National parks and nature reserves cover much of its rugged interior. It also encompasses hilltop towns, dating to the medieval and Renaissance periods. Regional capital L’Aquila is a walled city, damaged in a 2009 earthquake. The Trabocchi Coast, with sandy coves, is named after its traditional wooden fishing piers. 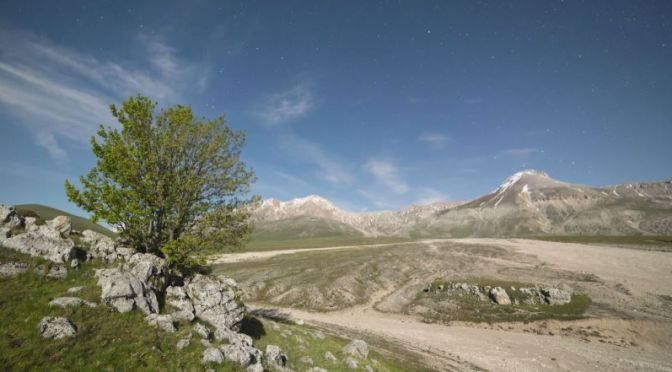 Filmed and Edited by: Giovanni Lattanzi

Magic vision of Campo Imperatore plateau, in Italy. An amazing timelapse video, entirely shooted in night time, both with or without moon. Tha dance of the cloud and fog, the run of stars and milky way.