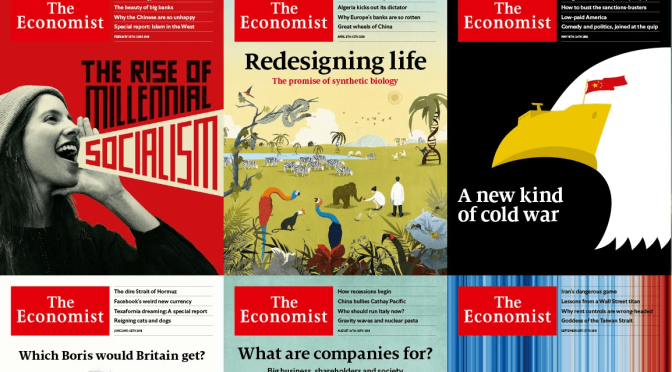 Europe faces an enduring crisis of energy and geopolitics

This will weaken it and threaten its global position

Disney brings back a star of the past. But its real problem is the script

Hollywood is suffering from the brutal economics of streaming

Europe should let them do their jobs

Retailers Are Bracing for an Unpredictable Holiday. Who Will Come Out Ahead.

After last year’s blockbuster season, retailers are stuck with bloated inventories just as consumers are pulling back. Get ready for sales, competition, and a new set of winners and losers.

Fed Tightening Is Having More Impact Than You Might Think

Match Group Stock Has Been Knocked Down. It’s Time to Pick It Up.

The Stock Market Has Stopped Worrying About the Fed. It’s Time to Worry About Recession.

An Apple Bull Gets Nervous. The iPhone Isn’t Recession-Proof.

Dow Surged 749 Points on Hopes the Fed Will Shift Gears

Fed officials are considering the timeline of a potential slowdown in interest-rate hikes, according to a Wall Street Journal report. Bond yields moved off their highs.

Tesla Stock Could Rebound in 3 Months. Here’s What it Would Take.

Tesla’s stock has been in a tailspin. But if the electric-vehicle maker is able to navigate a few bumpy months, it will be a signal that it’s headed in the right direction.

Big Banks Can Ride Out a Recession. The Top Stocks to Buy.

A recession in 2023 would put banks back on their heels after a strong recovery from the pandemic. Sticking with the battleships may be best.

A country of political instability, low growth and subordination to the bond markets

In 2012 liz truss and Kwasi Kwarteng, two of the authors of a pamphlet called “Britannia Unchained”, used Italy as a warning. Bloated public services, low growth, poor productivity: the problems of Italy and other southern European countries were also present in Britain. Ten years later, in their botched attempt to forge a different path, Ms Truss and Mr Kwarteng have helped make the comparison inescapable. Britain is still blighted by disappointing growth and regional inequality. But it is also hobbled by chronic political instability and under the thumb of the bond markets. Welcome to Britaly.

Changes in the housing market are often delayed in inflation data, which can make things difficult for the Fed. Housing is one of the most weighted categories when tracking inflation, but it’s also one of the most complicated to measure. WSJ’s David Harrison explains how the shelter index is calculated, and why it can muddy the inflation outlook for the Fed. Illustration: Laura Kammermann

California Is Pushing a Major Progressive Agenda. Will It Work?

A state long known for liberal policies is advancing the most progressive economic and social agenda in a generation. Some companies are moving out.

Our latest Big Money poll of professional investors finds many bearish about stocks in the near term, but bullish about the market’s longer-term outlook.

Where to Find Dividends as High as 5%

Their stocks are down, but regional banks have solid businesses, ample capital, and payouts attractive to income investors.

The Market Rebound Fizzled. Here’s Why a Real Bottom Could Form Soon.

Its five-yearly congress will further tighten one man’s grip

It will be an orderly affair. From October 16th the grandees of China’s Communist Party will gather in the Great Hall of the People in Beijing for their five-yearly congress. Not a teacup will be out of place; not a whisper of protest will be audible. The Communist Party has always been obsessed with control. But under President Xi Jinping that obsession has deepened. After three decades of opening and reform under previous leaders, China has in many ways become more closed and autocratic under Mr Xi. Surveillance has broadened. Censorship has stiffened. Party cells flex their muscles in private firms. Preserving the party’s grip on power trumps any other consideration.

The U.S. Dollar Is Superstrong. 8 Ways to Invest Abroad

The U.S. dollar got a brief, welcome walloping this past week, falling 1.5% on Tuesday alone against a basket of six major currencies. It remains up a hefty 17% for the year, and close to its strongest level in decades. That matters for ordinary savers, and not just forex flippers.

Rivian Is Recalling Nearly All Vehicles It’s Produced. The Move Shows the Challenges of Building Cars.

Payrolls Are Strong, Oil Is Rising. But the Fed Seems Intent on Raising Rates.

How to Invest for the Next 10 Years

The investment landscape is shifting. Here’s how to build a plan for long-term success—along with some stocks, bonds, and funds that can help you reach your goals.

The Fed Is Starting to Break Things. Stocks Are Paying the Price.

House Prices Are Cooling Down. But That Doesn’t Mean We’re Heading for a Bust.

The Fed Put Isn’t Dead, but It’s Still a Long Way Off

How not to run a country