NPR’s Tamara Keith and Amy Walter of the Cook Political Report join Judy Woodruff to discuss the latest political news, including whether enough Senate Republicans will vote to hear witnesses in the impeachment trial of President Trump and how 2020 presidential candidates are polling and campaigning in Iowa as its Democratic caucuses approach.

As the US Democratic party takes steps towards choosing who will attempt to win the presidency, Andrew Mueller discusses the candidates’ strengths and weaknesses and asks if they are up to the job. 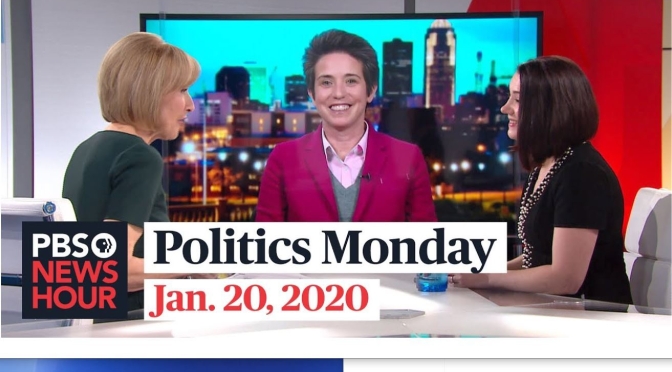 NPR’s Tamara Keith and Amy Walter of the Cook Political Report join Judy Woodruff to discuss the latest political news, including what Democratic voters in Iowa are thinking about the 2020 primary race, the elusive definition of “electability” and how President Trump’s Senate impeachment trial could affect the candidates.

Any hope of restoring unity in the country will require modesty, a willingness to compromise and the support of the many demographics that make up the Democratic coalition — young and old, in red states and blue, black and brown and white. For Senator Klobuchar, that’s acknowledging the depth of the nation’s dysfunction. For Senator Warren, it’s understanding that the country is more diverse than her base.

…Amy Klobuchar has emerged as a standard-bearer for the Democratic center. Her vision goes beyond the incremental. Given the polarization in Washington and beyond, the best chance to enact many progressive plans could be under a Klobuchar administration.

…Elizabeth Warren has emerged as a standard-bearer for the Democratic left…Ms. Warren has proposed to pay for an expanded social safety net by imposing a new tax on wealth. But even if she could push such a bill through the Senate, the idea is constitutionally suspect and would inevitably be bogged down for years in the courts. A conservative judiciary also could constrain a President Warren’s regulatory powers, and roll back access to health care.

Ms. Klobuchar and Ms. Warren right now are the Democrats best equipped to lead that debate. May the best woman win. 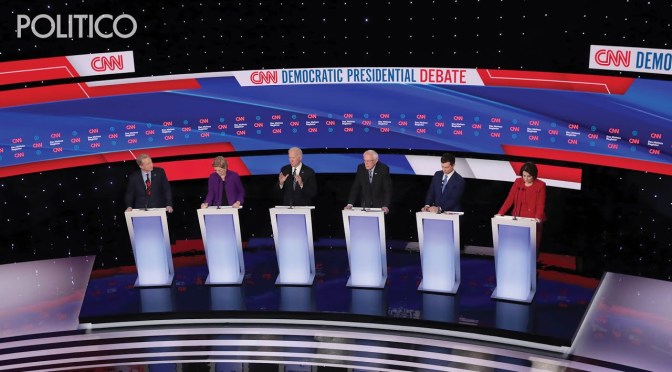 DES MOINES, Iowa — The Democratic presidential candidates had one last chance to contrast themselves on national TV before the Iowa caucuses. And in between slams of President Donald Trump, they delivered.

Joe Biden and Bernie Sanders traded criticisms of their long records on trade, foreign policy and health care. Pete Buttigieg and Amy Klobuchar reprised their December clash about experience in the Oval Office. And Elizabeth Warren turned a question about her allegation that Sanders said a woman couldn’t beat Trump — a comment Sanders has repeatedly denied making — into a call to recognize female political power in the Democratic Party.

NPR’s Tamara Keith and Amy Walter of the Cook Political Report join Judy Woodruff to discuss the latest political news, including shifting poll numbers from Iowa that show strength for former Vice President Joe Biden, the withdrawal of Sen. Cory Booker from the 2020 presidential race, signs of animosity between Sens. Elizabeth Warren and Bernie Sanders and what President Trump is tweeting.