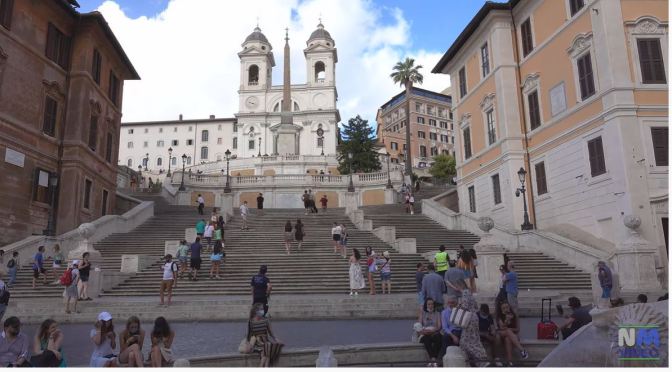 Piazza di Spagna, with the Spanish Steps, is one of the most famous in Rome. It owes its name to the palace of Spain, seat of the Iberian state embassy to the Holy See. In the center of the square there is the famous Barcaccia fountain, which dates back to the early Baroque period, built by Pietro Bernini and his son, the most famous Gian Lorenzo. On the side of via Frattina stands the Palazzo di Propaganda Fide, owned by the Holy See. In front of its facade, designed by Bernini (while the side facade is instead by Francesco Borromini), stands the column of the Immaculate Conception, which was raised after the proclamation of the dogma by the will of King Ferdinand II of the Two Sicilies in thanks for one escaped attack, and inaugurated on December 8, 1857.The monumental staircase of 135 steps, commissioned by Cardinal Pierre Guérin de Tencin, was inaugurated by Pope Benedict XIII on the occasion of the Jubilee of 1725: it was built, thanks to French funding starting from 1721, to connect the embassy of the Bourbons of Spain, to which the square owes its name, to the church of the Trinità dei Monti.It was designed by both Alessandro Specchi and Francesco De Sanctis after generations of long and heated discussions on how the steep slope on the side of the Pincio should be urbanized to connect it to the church. The solution chosen was that of De Sanctis: a large staircase decorated with numerous garden terraces, which in spring and summer is beautifully decorated with many flowers. The sumptuous, aristocratic staircase, located at the apex of a long road axis that led to the Tiber, was designed so that the scenic effects gradually increased as you approached. Typical of the great Baroque architecture was in fact the creation of long, deep perspectives culminating with scenes or backgrounds of a monumental nature. The church of the Santissima Trinità dei Monti is one of the 5 French-speaking Catholic churches of Rome, together with San Luigi dei Francesi, San Nicola dei Lorenesi, Sant’Ivo dei Bretoni and Santi Claudio e Andrea dei Borgognoni.