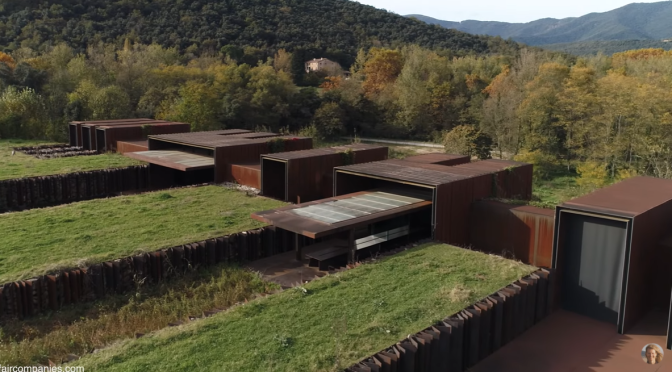 Olot (Catalonia, Spain, population 34,000), an old town in the midst of the Pyrenees’ foothills, is well known for its forested volcanoes, country estates (“masías”) & evergreen pastures, but when Fina Puigdevall talked to her former classmate Carme Pigem about revamping her restaurant Les Cols plus building her new house, neither of them could have imagined that, later on, the former would become a celebrated Michelin-starred chef, and the latter a Pritzker-prize-awarded architect.

Puigdevall grew up in Les Cols, her family’s 15th century masia. In 1990, in an attempt to save it from development, she opened a restaurant in the former stables downstairs. With no formal culinary training, she worked her way to two Michelin stars by 2010 (which she has held since). In 2000, she hired Pigem and RCR architects to open up the space to the outdoors: they designed a light/water cube in the kitchen and a huge glass wall framing the apple orchard and chicken run.

The result is a dining experience that feels immersed in the outdoors. When Puigdevall wanted to expand her own home – a former mill straddling a creek – to accommodate her husband and three daughters, RCR Architects told her they wouldn’t touch the original structure, but proposed something completely new in the middle of the former corn fields. What they dubbed “Horizon House” is a corten steel structure carved into the hill. Large walls of glass can be opened to allow the fields – now planted with native crops like buckwheat- to enter the home.