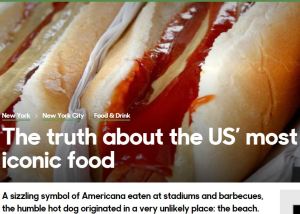 “As the newly opened Coney Island and Brooklyn Railroad brought many more people to the seaside from Manhattan in the late 1860s, customers told Feltman that they wanted to eat hot food, not cold clams, according to Richard F Snow, the former editor of American Heritage Magazine. So in 1867, Feltman called on the wheelwright who’d originally made his cart and asked him to modify it. The craftsman built a custom charcoal brazier for cooking sausages and a metal box for warming bread.”

If there’s any food that represents Americana, it’s the humble hot dog. Today, these bunned frankfurters are sold at every baseball game, grilled at nearly every backyard barbecue and available at roadside convenience stores from the Carolinas to California. In fact, this most archetypal of American foods originated as the US started to stitch itself back together in the 1860s following the American Civil War and forge its new identity. But while you can now find these seasoned sausage sandwiches across the American heartland, the hot dog’s iconic home is on the boardwalk at New York’s Coney Island.