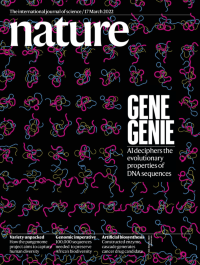 For more than 50 years, scientists have been trying to understand the relationship between DNA sequence, gene-expression phenotype and fitness to decipher principles of gene regulatory evolution. In this week’s issue, Eeshit Dhaval Vaishnav, Carl de Boer, Aviv Regev and their colleagues present a framework for understanding and engineering regulatory DNA sequences that takes a step towards this goal. The researchers built this framework around an ‘oracle’ they developed using a deep neural network model that predicts gene expression given a promoter DNA sequence. The neural network was trained using the expression measurements for tens of millions of promoter sequences. The result was an AI oracle that predicts expression from sequence well enough to study the evolutionary history and future evolvability of regulatory DNA sequences, as well as to design regulatory DNA sequences for synthetic biology applications. The cover offers a visual representation of the evolutionary properties of sequences at the extremes of the evolvability spectrum.